While we’re only a month away from the return of The Walking Dead, the fourth season of AMC’s zombie series’ is shaping up to be a riveting season of television. Since the series’ start in 2010, The Walking Dead has mixed high drama with heavy action, but over the last two years it seemed that the show’s writers and producers only wanted to focus on the latter. Now that The Walking Dead has a new showrunner in Scott Gimple (the series’ third in four years), it seems as if the TV series is getting back on the right track.

In an interview with Channel Guide Magazine, The Walking Dead‘s executive producer Greg Nicotero is confident fans of the series will love what the show has in store for them when it returns. Nicotero also teases what The Walking Dead‘s return will mean for Rick Grimes and his son Carl, last seen alone and fleeing the ruins of the prison. Nicotero says:

I feel like Episode 9 and onward really [hearkens] back to the first season of The Walking Dead, because if you think about Season 2, they were on Hershel’s farm and in Season 3 and half of Season 4, they had the prison and Woodbury, so this is the first time that they’re out in the world again. It’s the first time that we really get that sense of how big the world is and how unprotected people are in the wilderness.

Nicotero says fans of Robert Kirkman’s comic book won’t be disappointed with the direction of The Walking Dead‘s mid-season premiere. It’s “the closest adaptation to two issues of the comic-book that we’ve ever done,” claims Nicotero.

The Walking Dead executive producer continues to vouch for Scott Gimple’s work on The Walking Dead and feels that the best has yet to come. In the second half of season four, the group will meet new characters — including Eugene, Abraham, and Rosita — who will play heavily into the series’ ongoing narrative. Nicotero also teases that a familiar face will return to the series in the form of Morgan, played by Lennie James.

As for the series’ ongoing mysteries, we still have no idea who fed the zombies rats, what the mysterious message on the radio was, whether Tyreese will discover that Carol killed Karen, and what happened to baby Judith. Maybe George Romero was right to say that The Walking Dead is just a soap opera with zombies. Nicotero, however, praises Gimple for having an end game when it comes to season four.

‘The beauty of Season 4, in my opinion, is that every single moment is there for a reason,’ he confirms. ‘Stuff that we shot in the first episode this year pays off later, and it’s like each character has a beginning, a middle, and an end. It’s really satisfying. Scott Gimple has really steered our ship in the right direction. Scott knows what’s going to happen in Season 5 already. He probably already knows what’s going to happen in Season 6.’

Meanwhile, AMC has released a new teaser poster that hints at the direction of the second half of season four. It appears that one of the episodes will feature Carl as its central character. It’s most likely that episode will be The Walking Dead‘s mid-season premiere and will follow the story from the comic book where Rick takes too many antibiotics and Carl finds him unconscious in a house near the prison.

The Walking Dead returns for the rest of season four on February 9, 2014 on AMC. 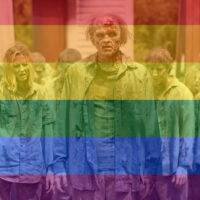 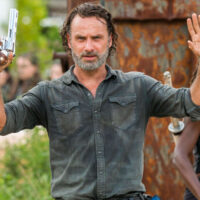