If you haven’t seen last night’s season finale of The Walking Dead, know that there are some spoilers ahead, but it’s mostly only about when [redacted] shows up to [redacted] in the [redacted]. While The Walking Dead often draws a small gasp out of me with its shocker moments, it’s hard to argue against this being one of the more predictable shows on TV, which helps to make those shocks all the more rewarding in the long run. In any case, it’s no shock that with last night’s season four finale the AMC show broke its own ratings record with 15.7 million total viewers (10.2 million in the key demographic), up from last season’s 12.4 million finale viewers. The producers are also predictably securing the cast for next year before the blood-red paint dries from last night’s conclusion. They’re officially promoting Alanna Masterson, Christian Serratos, and Andrew J. West to “series regulars” going into Season 5.

You’ll know Masterson as Tara (not the same one from the comic), the rebellious Governor-loving hardass who immediately turned pacifist once the blood started to flow. (Mostly from Herschel’s headless body, then from he sister and the Governor.) Tara’s life completely fell apart after that, and she was only a shell of her former self when she joins Glenn on his quest to find Terminus.

Serratos plays Rosita, a character that clearly hasn’t met expectations of her badass character in the comics, but perhaps the best is yet to come now that she, Abraham and Eugene will be appearing more often. Having everyone all in one place is going to make Terminus a very interesting place indeed. And this supposed safe haven (that is probably full of rapist cannibals) is where West’s character Gareth comes into the story. He is the leader of the group living inside what we’ll lovingly refer to as the lunatic-filled commune, and his character is going to be a big part of the fifth season. No doubt he will go head to head with Rick, Daryl, and Tyreese before the opening credits of the season premiere. As Robert Kirkman tells THR, “There is a very deep, dark, and storied history to Terminus and how these people came to be that will be revealed in season five.” Let’s hope West can pull off the monstrous villain role half as well as David Morrissey.

Last year, the producers took four days after the third season’s finale to bring Morrissey, Chad L. Coleman, Sonequa Martin-Green, and Emily Kinney into the fold as regulars, but they didn’t even wait 24 hours this time. Maybe they took some hints from the events of the episode to get people to sign on. Surely the Terminus crew can’t be that depraved, right? Join me and many millions of others in about seven months to see if that’s a good assessment or not. 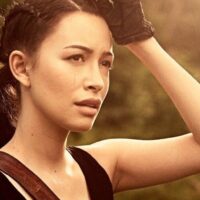