Well, that’s one way to start off a season. A couple of years ago, if I told you the biggest show on television would kick off its fifth season with cannibals, blood spurting from sliced-open throats, and one group of people preparing to gouge out the eyeballs of another group of people, you might not have believed me. But we live in a world where AMC’s The Walking Dead is more popular than we ever could have imagined, and that, and more, all happened within the first few minutes.

It should go without saying that if you haven’t watched the season 5 premiere, “No Sanctuary,” you might want to stop reading right now, as we’re going to get into all manner of spoiler type things, like spoilers. 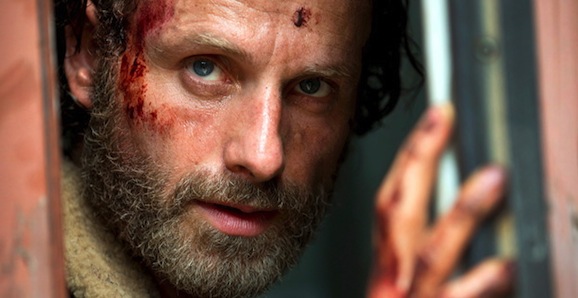 Since season 4 of The Walking Dead ended on such a cliffhanger, we’ve been promised in the interim that season 5 hits the ground running, and they weren’t lying. While there are a few moments set aside in an attempt to create characterization and emotion—including a touching, almost wordless reunion—action is the order of the day. From start to finish, “No Sanctuary” is all movement and tension, and while it works well here and is an exciting way to debut a new season, I have to hope that there is more, and that this sort of adventure isn’t all the writers have in store.

We begin where we left off, with Rick (Andrew Lincoln) and company trapped in a train car at Terminus. You knew the residents, led by Gareth (Andrew J. West), were a sinister bunch, but you’re about to find just what their deal is, and it’s none too pretty. After tooling up, only to be gassed unconscious, Rick, Daryl (Norman Reedus), Glen (Steven Yeun), Bob Stookey (Lawrence Gilliard Jr.), and four no names, wind up on the killing floor, literally in a cannibalistic butcher shop. This is where “No Sanctuary” is the most vicious, as the glorified extras are clubbed and aerated in graphic fashion. But before they can move onto someone whose name you know, and explosion rocks the compound.

While most of the main characters are trapped in Terminus, we know that Carol (Melissa McBride) and Tyreese (Chad L. Coleman) are still out there in the wilderness, on their way, but running a little behind, baby Judith Grimes in tow. This is where Carol, who has made perhaps the greatest transition of any character in the series, is on full display. As we learned last season, she’s the one who does the things no one else can even consider doing. After coming upon a resident of Terminus, obviously up to no good, they kidnap him and she goes to check out the lay of the land. And good thing too, because she gets there just in time to witness Rick and the others being taken away, and covered in walker guts, she unleashes a chaotic, full-frontal solo assault.

This is the set up, and the bulk of the episode is taken up watching various splinters of the group run around and try to escape. Rick’s crew breaks away from their captors, free the others, and Carol wanders around being grim and harsh. There’s a great deal of sprinting, shooting, stabbing, and using improvised weapons intercut with Tyreese, left alone with a captive and a baby in a cabin, struggling with making hard choices of his own.

One issue I’ve had with The Walking Dead over the years is that whenever the group has been faced with a tough decision, the options have been endlessly debated back and forth ad naseum. What “No Sanctuary” does well is in this fast-paced action it presents the characters with hard situations, ones where neither potential outcome is particularly pleasant, but the immediacy demands action right now.

Tyreese has trouble with this, and as a result almost pays a horrific price. Carol has adapted, but at a hefty cost to herself. And you can’t really say that Rick thrives, but he’s also adjusted to the decisive necessity in a big way. When we last saw him, saying the people of Terminus were “screwing with the wrong people,” he was as close as he’s ever been in the series to being the character from Robert Kirkman’s comics, and that looks to be something that is continuing. Hell, at one point, after they make their way out of the compound, he prepares to tool up and go back, ready to hunt and slaughter every last person he finds. He’s walking a very fine line, and it’s going to be interesting to see him toe that moving forward. 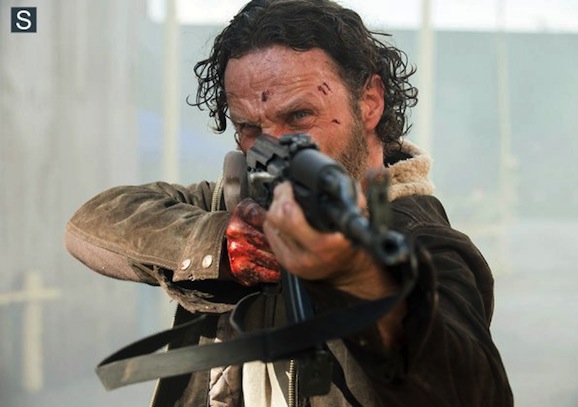 As all of this swirling chaos ensues, walkers swarming, bullets flying, you pick up bits and pieces of the larger picture. There is a brief glimpse into the history of Terminus, which has not had an easy time in its own right—there are definite reasons why they are like they are. Mullet wearing scientist Eugene (Josh McDermitt) spills a little about the potential “cure” that’s waiting in Washington DC, indicating what at least one piece of the future could look like.

Bleak and grim as it is, “No Sanctuary” is not without it’s softer moments, coming obviously near the end when the action heavy parts have largely wrapped up. Carol and Daryl have always had a close relationship—one that has been the focus of much rumor and speculation, and probably some slash fiction if you care to find it—and when they come together, for the first time since the first half of season 4, it’s a legitimately touching moment. As is when Rick and Carl (Chandler Riggs) see Judith, who they thought was dead. That reaction a bit of a surprise considering Rick has spent most of the time since her birth totally ignoring her, but he’s her father, so what the hell.

“No Sanctuary” concludes on a hopeful note. They almost became food, had to kill a bunch of people, and are once again on the road with little to no protection, but they’re together, they didn’t go looking for a fight, and they still have a grip on their humanity, as Glen points out, tenuous as it may be.

Despite a brief ray of optimism, there is a lot to consider. First, there’s no Beth (Emily Kinney). After the kerfuffle at the prison, she and Daryl made their escape and formed a close bond, also the subject of much speculation. She was, however, taken by mysterious people in a black car with a cross painted in the back window. We know she’s alive, having seen her in some of the teasers and trailers building up to tonight’s premiere, but we’ll have to wait to get to her later.

We also see that one woman Carol kills at Terminus is Gareth’s mother. You saw him get shot, but you’re not sure if he’s dead or not. Again, we know he isn’t, having seen him in the marketing, and his mom getting capped is probably not going to sit well, so you know that he’ll be back, and be rather eager to encounter Rick and company again.

And The Walking Dead took a page from the Marvel playbook, adding their own post-credits sequence. As the survivors walked away, Rick defaced a sign leading to Terminus (with what looks a little like poop no less). At the very end, a figure, face hidden by a mask and scarf, comes upon this very sign, which now reads “No Sanctuary.” When he removes his coverings and turns around, you see an unexpected face, Lennie James’ Morgan. The character has only been in two episodes—the very first, and “Clear” from season 3 (one of the best episodes in the series, and a big reason why I was optimistic that Scott Gimple, who wrote it, was a good choice to take over as showrunner)—but they’ve both been important and memorable turns.

All of this taken together adds up to an interesting picture for the future of The Walking Dead season 5. What did you think about the season 5 premiere? Let us know in the comments below.

Nick Fury Is Getting His Own Marvel TV Series, Sam Jackson Will Star