The return of AMC’s hit zombie drama The Walking Dead may still be a ways off—season 5 doesn’t start until Sunday, October 12—but, as always, they’re making sure that we have a lot to talk about over the off season. It looks like Rick (Andrew Lincoln), the grizzled protagonist, is making strides towards becoming the character fans of the comics know and love, which you can see in this short new teaser. In a second clip, we also get to catch up with some characters out wandering in the wilderness. Another hot topic of conversation lately has been the sexuality of another character, namely everyone’s favorite redneck biker, Daryl Dixon (Norman Reedus), and we’re learning why it is that we know very little about it.

The main difference between comic Rick and TV Rick is decisiveness. TV Rick has been prone to pussyfooting around, weighing pros and cons of various scenarios, while comic Rick is all about action. Not necessarily by choice, but in a world where the dead have risen and are trying to eat you, and where most of the people you encounter also want to kill you somehow, the situation often dictates that you make a decision and you make it now.

Over the course of the second half of season 4, Rick has crept closer and closer to who he is in Robert Kirkman’s comics that serve as the source material for the show. And in the final moment of the last episode, it becomes difficult to discern one from the other. He shows that fuck you, spit in your face defiance that he’s been lacking, and in this first video, that’s on full display. He may be trapped, but if you mess with him, if you mess with his, he will end you.

While most of the key players from The Walking Dead wrapped up the season imprisoned in Terminus, Tyreese (Chad L. Coleman), Carol (Melissa McBride), and baby Judith Grimes (Baby), are still out there roaming free. Not free of threats, obviously. There are still walkers all over the place to contend with, and whatever or whoever that quickly moving shadow at the end of this clip is, could turn out to be a big problem. 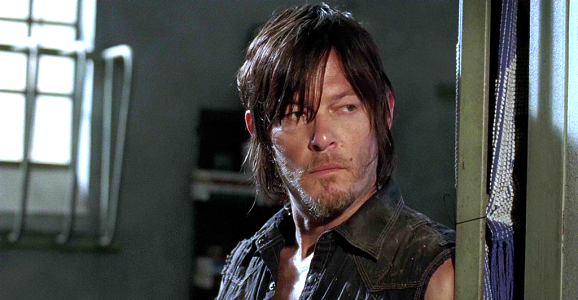 And now we move on to the hotly debated topic of Daryl’s sexuality. He’s been in some weird situations with women lately that could very easily have taken romantic turns, most notably with Carol and Beth (Emily Kinney), but neither did, or at least haven’t. That has led to lots of speculation that he could be gay. But then it was confirmed that producers of the show have sat down and discussed the matter, though they didn’t reveal it either way.

Talking to TV Line, showrunner Scott Gimple, did say that there is going to be a gay character on the series at some point, but played coy as to whether or not it might be Daryl. He says:

The fact that there’s still a question as to what Daryl’s orientation is in Season 5 absolutely speaks to Daryl’s character; he is a very guarded, very closed-off individual in a lot of ways. We have been able to see him ever so slowly open up and show the other characters aspect by aspect as to what makes him tick. That’s been a very satisfying journey for all of us on the creative side to portray. [And] he’s still on that journey.

It’s never struck me as odd that this topic hasn’t come up. First, the group of survivors have a lot to deal with, what with the end of the world and trying not to die, and for some people not named Maggie (Lauren Cohan) or Glenn (Steven Yeun), knocking boots takes a back seat. Second, as Gimple says, Daryl’s not the kind of guy who tells everyone every aspect of his life. A character that only exists on the show, not in the comics, he’s private and quiet, and this kind of thing is very much his business, not anyone else’s.

As far as the gay character, just because there is one, doesn’t mean it’s going to be Daryl. The show is loosely following the story arc of the comics, and before long, they come to the Alexandria Safe Zone. There have even been hints that they’ll get there in season 5. The production building a big wall around an entire neighborhood outside of Atlanta is something of a clue. In the comics, when they arrive, two of the characters they meet are Aaron and Eric, a gay couple in a loving, stable (as stable as anything is in this world), long-term (as long-term as anything can be) relationship. It could very easily be these two that Gimple is referring to, or someone else entirely that we don’t even know yet.

However it works out, plan to see it unfold on the screen in front of you, not as a big, juicy announcement ahead of time. Gimple makes it clear that they’re not going to spill the beans and that we’ll just have to wait and see. And isn’t that the best way?