The Walking Dead Returns: Today In Science And Science Fiction It’s October again, and that can mean only one thing…I mean aside from the increasingly absurd “sexy” Halloween costumes. No, I’m referring to the return of AMC’s hit zombie drama, The Walking Dead. Based on Robert Kirkman’s long-running comic series, the show launches its fourth season later tonight. As the season begins, Rick and company are still holed up the same prison they were all last season, but now they’ve got a ton of new guests, whether they want them or not. The decision not to shift setting was a surprise, as the show has done so pretty much every season so far, but I guess that lets them keep using some of the same sets. Let’s just hope the writers manage to make good use of it since we’re still going to be hanging around the prison for a while. Maybe they can discover that a zombified Andy Dufresne has damaged their security by tunneling through to the outside world.

The show once again has a new showrunner — already having gone through both Frank Darabont and Glen Mazzara. Hopefully the new guy, Scott Gimple, will stick around for a while and help improve the show’s overall consistency of quality. He wrote one of the best episodes of the series, last season’s “Clear,” so we’re cautiously optimistic. Will he be able to break the dread curse of the Walking Dead showrunner? Time will tell.

Research continues in the brothel but skewed data convinces Masters to get the study back into the hospital. Meanwhile, Johnson meets a new female doctor; Libby struggles to conceive; and Dr. Haas gets the case of a lifetime: a woman pregnant with quadruplets.

Star Trek has introduced us to a lot of colorful personalities over the years, but there’s no forgetting that rapscallion Harcourt Fenton Mudd. Played with gusto by Roger C. Carmel, Mudd is a con man and occasional thorn in the side of Kirk and his crew, first in the episode “Mudd’s Women,” which premiered on this day in 1966. Everybody enjoys a lovable rogue, and Mudd fit that description to a T, whether he was delivering women to a pack of horny lonely miners, ruling a planet of sexy android ladies, or just pretending to be somebody else. After “Mudd’s Women,” he returned for “I, Mudd” and the Animated Series episode “Mudd’s Passion.” His legacy has even been hinted at in the J.J. Abrams movie timeline: in the in-canon comic prequel Countdown to Darkness features Mudd’s half-Bajoran smuggler daughter. In fact, that ship Kirk and company use to go to the Klingon homeworld in Into Darkness? That used to belong to Mudd’s daughter. Kathryn Bigelow’s Strange Days opened in theaters on October 13, 1995, and to this day it’s one of those science fiction classics that never seems to get the appreciation it deserves. Starring Ralph Fiennes, Angela Bassett, Juliette Lewis, Tom Sizemore, Vinent D’Onofrio, and Mcihael Wincott, Strange Days a cyberpunk tale of a then-future 1999 Los Angeles where tech called a SQUID (Superconducting Quantum Interference Device) allows users to record events straight from the brain, allowing others to relive every aspect of those events. Fiennes is an ex-cop turned SQUID dealer, but when he gets his hands on a recording depicting the rape and murder of a girl, things get interesting but fast. You can watch Strange Days on Netflix Instant this very moment, so get to it!

Chris Carter – October 13, 1957
Even if all he’d ever done was create The X-Files, Chris Carter’s place in pop culture history would have been assured. And while none of his other shows created while he was on his X-Files hot streak fared near as well as the adventures of Mulder and Scully, Millennium, Harsh Realm, and The Lone Gunmen were all still interesting in their own way (as far as I’m concerned, parts of Millennium are as good or better than The X-Files). After a long absence, Carter is returning to television — or at least to television-style visual serialized storytelling — with The After, an apocalyptic drama in the works for Amazon. Wayne Pygram – October 13, 1959
Most of us would probably never recognize him without the makeup, but actor Wayne Pygram served up one of the all-time-great sci-fi villains as Farscape’s Scorpius. Decked out in gaunt, pasty prosthetics and an outfit straight out of your local S&M club, Pygram chewed scenery with gusto, shifting loyalties, betraying alliances, and generally being a constant thorn in the side of John Crichton and company. He’s continued to appear in TV and film, including a brief cameo in Star Wars: Episode III – Revenge of the Sith…playing a young Tarkin! 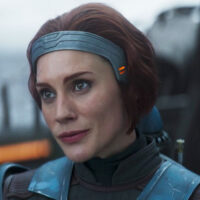