Last week’s episode of AMC’s The Walking Dead, “Internment,” left a lot for fans to ponder. First up, Daryl (Norman Reedus) is about to find out that Rick (Andrew Lincoln) banished Carol (Melissa McBride). Daryl’s a good guy, and the best character on the show, but he’s also a crazy redneck powder keg, so you never know how he’ll react, especially to news like that. Then the final shot of episode dropped an even bigger nugget into your lap. The Governor (David Morrissey), the primary antagonist for season three, who had been noticeably absent thus far in season four, shows up out of the blue, watching the prison like a creepy peeping tom. How does all of this shake out? Read on to find out, but beware, there are some serious SPOILERS if you haven’t watched this weeks Walking Dead, “Live Bait.” 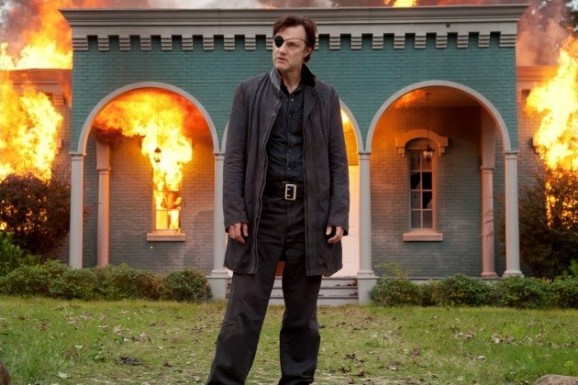 First off, if you were hoping to see Daryl’s response, or actually anything at all that’s going down at the prison, you’re out of luck. There’s none of that. In fact, this is one of the stand-alone episodes about the Governor that fans were promised over the off-season. Admittedly, this change of scenery is a welcome distraction from the main action at the prison. That plague story line has been pushing the boundaries of tedium. It’s fine, but this break is a nice breath of fresh air.

“Live Bait” picks up in the immediate aftermath of the Governor slaughtering his own people. At this point his is damaged, perhaps irreparably, and after he sits there catatonic as a walker stumbles into his fire, the few bros he has—Martinez (Jose Pablo Cantillo) and his cronies—leave him on his own. Stop one is burning Woodbury to the ground, destroying everything that he worked so hard to build. Then he turns into a hobo, a post-apocalyptic drifter, roaming from place to place, dead inside, witnessing the desolation of the world, looking increasingly like Snake Plissken from Escape From New York.

As he falls in the street, ready and willing to die, the story takes a turn, one that some of you might recognize. The bulk of this episode is lifted directly out of Robert Kirkman’s novel, The Rise of the Governor, which explores the origins of the character and Woodbury. This incarnation is different in many ways, but the surface level plot points are the same. Just as he is about to lie down and give up, he sees a girl in a window. Initially you assume that this is a vision of Penny, his dead zombie daughter that Michonne (Danai Gurira) hacked up in season three, but when he is drawn into the apartment building, he finds a family. In addition to the girl, Megan (Meyrick Murphy), he finds her mother (Audrey Marie Anderson), aunt, and grandfather.

There is a weird feeling in this set up. In the novel this takes place early in the outbreak, before Woodbury, before the Governor becomes the Governor. In this incarnation, the zombie apocalypse has been going on for some time, but you can’t help but feel like you’ve been transported back to the beginning. For instance, they don’t know that you have to destroy the walker’s brain in order to put them down. The writers try to explain this away with the fact that they’ve been isolated—there’s a food source, so they don’t have to leave—but asking you to make this leap is a bit much.

At first intending to spend a night and move on, the Governor bonds with the girl, then her mother, and the rest. As the episode progresses, he starts to reclaim himself. First going on a run for oxygen tanks for the invalid old man, then connecting with the girl, and the others in a way he hasn’t in, you don’t know how long. You watch his internal struggle, fighting the urge to protect them, the urge to stay and put down roots—the very same compulsions that likely led him to establish Woodbury in the first place—and his desire to move on and be alone.

Eventually the Governor leads his new charges out into the world—after crushing the skull of their zombified father with an oxygen tank—and you keep waiting for his old personality to rear its ugly head. You can see the battle clearly raging inside him at the same time, especially when Megan is in danger of being bitten. He was never fully the brutal, psychotic despot from Kirkman’s comics, but you’re having a hard time accepting this new, kinder, gentler Governor. No matter what he tells the girls, or what he tells himself, his past is always there, lurking. And this is how “Live Bait” ends, with his past coming back to haunt him. His new and old worlds collide head on when he runs right smack into Martinez and surviving goons from Woodbury.

So that’s where this episode of The Walking Dead leaves you, again with more questions about the future. After swearing, crossing his heart and hoping to die no less, to protect Megan, things are going to get grim for the Governor, and . He won’t be able to pretend anymore, he won’t be able to lie his way around the terrible things he’s done, and he’s going to have to make some hard choices.

How does he get from this point back to the prison? In the last shot of “Internment” you only see him, no one else. This brings up an interesting idea. What if the Governor’s change of heart is legitimate, and he really has reconnected with the paternal, care giving part of his personality that he thought was gone? In the sneak peak at next week’s episode, you see Martinez’s crew raiding other camps, taking their stuff, and presumably leaving a bunch of dead bodies in their wake. Wouldn’t be the first time.

What if, and bear with me for a second, the Governor shows up at the prison, not as an act of aggression, but looking for allies, looking for help to stop Martinez? That would certainly be a departure, both from the series thus far, as well as the source material. It almost feels like a one or the other proposition, like he’s either going to revert to being ruthless and evil, or cross the field and become something of a hero. I’m sure Rick, Daryl, Glenn, Maggie, and Michonne will have something to say on the matter.

What do you think? Has the Governor redeemed himself? Can he be redeemed? Do you want him to?

Here is a promo video from next week’s episode, “Dead Weight.”