This is a busy time for The Walking Dead. As AMC gears up for the fourth season of their hit zombie drama, which returns to the cable network in just a hair over two weeks—on Sunday, October 13, to be precise—we’re getting all sorts of news. Right now we have a bunch of photos from the first episode of the season, “30 Days Without an Accident,” the episode titles and short descriptions of the first four episodes, a fresh bit of casting news, and a the announcement of another series of web shorts shuffling around on the horizon.

This gallery of photos casts a wide net. There are, of course, a bunch of pictures of walkers pushing against the fence that surrounds the prison that Rick Grimes (Andrew Lincoln) and company occupy. That’s to be expected. You also get a look at a couple of the new additions that joined the cast last year, Tyreese (Chad Coleman) and his sister Sahsa (Sonequa Marin-Green). New blood means new opportunities for drama and story, as well as grisly death. And of course, there are the obligatory running shots. The Walking Dead certainly does love to show pictures of cast members running.

Season four picks up a few months after the conclusion of the last go round, and the survivors have settled in and made some adjustments. One of these is that they’ve started farming. Good thing they have Hershel (Scott Wilson) around. Even with one leg he knows more about growing crops than everyone else combined.

There’s something else that comes with safety and security, it appears that love is in the air. Glenn (Stephen Yeun) and Maggie (Lauren Cohan) get some snuggle time. No surprise there, those two are like especially horny rabbits. You get a peek at the weird budding romance between Daryl (Norman Reedus) and Carol (Melissa McBride). It’ll be interesting to see what The Walking Dead does with that. And doesn’t part of you imagine that Beth (Emily Kinney) practicing writing “Mrs. Carl Grimes” over and over in her diary as she lays on her bunk bed underneath a hand drawn ladybug?

So you know that episode one is called “30 Days Without an Accident,” but AMC has released a brief new description of what we’ll see. “The group lives an ideal life at the prison, and strives to hold onto humanity.” And just for the hell of it, here are the titles and short synopsis of episodes two, three, and four:

The group faces a new enemy; Rick and the others fight to protect their hard-won livelihood.

A group leaves the prison to search for supplies; the remaining members of the group deal with recent losses.

The supply mission faces hurdles; the situation at the prison worsens.

None of these titles or accounts tell you much in the way of specifics, but you get a definite feel for the direction The Walking Dead is headed. You start out calm, things are going well and getting back to a state that is as close to normal as you can hope for in the midst of the zombie apocalypse. Sure they have to deal with some traumas and losses, but overall, things don’t look too bad. Then the situation takes a turn for the worse. You throw a new wrinkle into the mix and that sense of well being that the group had fostered recently evaporates. When you split the group up, each splinter faces new challenges and horrors.

Keeping with the theme of change, you already know that season four is going to introduce a ton of new faces into the mix. Some we’ve met, like Tyreese and Sasha; some we’ll meet soon, like Bob Stookey (Lawrence Gilliard Jr.), and the survivors from Woodbury; and some we’ll meet later on in the season, like Rosita Espinoza (Christian Serratos), who will team up with Rick’s group later on in the season.

Because there can never be enough zombie fodder, Deadline reports that The Walking Dead has added Alanna Masterson, who is most known for an episode of Terminator: The Sarah Connor Chronicles and appearing on a sitcom called First Day that I’ve never heard of. There’s no word on who she’ll play, but some theorize that she’ll be Tara Chalmers, a character introduced in issue 104 of Robert Kirkman’s comic books. Regardless, she should also pop up around the middle of the season.

And now for the final bit about The Walking Dead, for today at least. To whip fans into a truly rabid state for the main series, and to show other vantage points to the end of the world, AMC is fond of putting out short webisodes, and there are more in store in our very near future.

Called “The Oath,” and written, directed, and conceived by special effects guru Greg Nicotero, this new three episode arc hits the web on October 1. The seven to ten minute shorts follow survivors Paul (Wyatt Russell) and Karina (Ashley Bell). After a walker attack leaves them wounded, they tear ass down the highways looking for help. When they find a hospital that hasn’t been run into the ground by zombies, they think their prayers have been answered. But remember, this is The Walking Dead, and the living are often much, much worse than the dead. 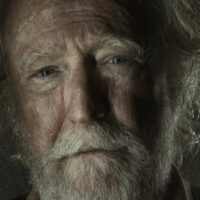