In about two weeks, The Walking Dead will return to finish out its fourth season. According to showrunner Scott Gimple, by season’s end we’re going to find out who fed the zombies rats, more about the mysterious message on the radio, whether Tyreese will discover that Carol killed his beloved Karen, and what happened to baby Judith Grimes. Now AMC has released images from the upcoming mid-season premiere episode, “After.”

The first image features Michonne with two new zombie pets. When we first met Michonne at the end of season two, the badass killer had two zombies on chains that she used to get through hordes of walkers. Michonne made sure that the zombies wouldn’t attack her by cutting off their arms and ripping out their jaws. If you’ve read the comics, you’re aware that those two zombies were her former boyfriend and best friend. On the TV series, she killed off her zombie pets when Merle compromised her. It’s good to see that Michonne has found two new “pets.” It seems she has reverted back to her old ways after losing the prison after the Governor’s attack. The next image features Carl watching over his father after said attack. The second half of the season will feature Carl in a more pronounced role, as the group is now separated and fending for themselves in the wilderness. It’s believed that the mid-season premiere will feature the storyline from Robert Kirkman’s graphic novel that follows Rick taking too many antibiotics and Carl finding him unconscious in a house near the prison. You can clearly see in the above image that Rick is passed out on the couch. It’s one of the slower stories from the comics, so it seems that the mid-season premiere will not be as action packed as the mid-season finale.

AMC also released a new behind-the-scenes video that clues audiences in to what to expect for the back half of season four. While the video is spoiler-free, it does feature footage and reveals the direction of the rest of the season, so watch with caution. But rest assured, the video also features a lot of zombies getting beheaded. AMC also released a condensed synopsis of the mid-season premiere episode: “As Rick deals with old wounds, members of the prison have to come to terms with their new environment and ask themselves if survival alone is enough.”

AMC is offering a Walking Dead marathon as counter-programming during this Sunday’s Super Bowl XLVIII broadcast on Fox. The marathon will only feature season one and season two of The Walking Dead, which the cable network has dubbed “The Zombie Bowl.” It starts on Sunday, February 2 at 10 AM EST and will run throughout the Super Bowl. 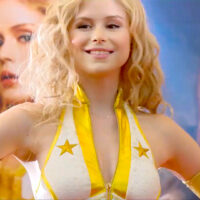 The Boys Season 2 On Amazon: All We Know About The Show’s Bloody Return