Tomorrow’s episode of The Walking Dead will see the long awaited return of the Governor. We haven’t seen him since season three’s finale episode, “Welcome To The Tombs,” after he went mental and killed off his own people. His return should inject some much-needed life into the show after the deadly plague storyline that went nowhere slow. While David Morrissey plays the villainous Governor in an extremely vile way, the British actor’s recent appearance on the daytime talk show Ellen shows that the actor is very different from his onscreen persona.

While promoting his return, Ellen DeGeneres gave Morrissey a good scare during his interview. The talk show host asked him if being surrounded by extras dressed as convincing zombies has ever scared him, and he recalled an amusing anecdote about his first day on set. During the short story, a man dressed in a not-so-convincing zombie/gorilla mask snuck up and startled the actor from behind.

Meanwhile, astrophysicist, and notable cinematic buzzkill, Neil deGrasse Tyson appeared on The Daily Show with Jon Stewart to debunk scientific notions of the zombie apocalypse. Tyson is known for calling out popular movies and TV shows for being scientifically inaccurate. He brings up how the zombie apocalypse is all but impossible with the idea that the dead could rise from their graves to eat human brains. While Tyson points out the various flaws in “science” on The Walking Dead, he seems to have forgotten the second word in the genre term, “fiction.” Tyson does, however, open the door for the existence of space zombies.

A few months ago, Tyson tweeted the scientific inaccuracies in Alfonso Cuarón’s Gravity. Although he called out the science in the film, he did praise the intense and thrilling actions scenes and ultimately felt that the film is worth seeing. In the past, Tyson pointed out problems in films like Prometheus, Men In Black, The Avengers, and more.

Lastly, we have a few more stills) for tomorrow night’s episode “Live Bait.” The episode is a stand-alone designed to catch the audience up on what the Governor has been up to. On the run, he slowly plots against Rick and his group. In AMC’s sneak peek promo for “Live Bait,” we see The Governor burn down a house in the aftermath of Woodbury.

While its unclear if The Governor wants to get his people back, or if he’s just out for revenge, “Live Bait” should be an explosive episode full of zombie hordes. 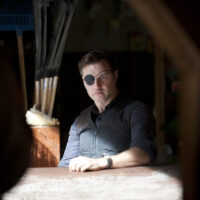