Vice takes place in a dingy world where Willis’ Julian Michaels — which indeed kept bringing Jillian Michaels to mind — has opened up a resort where a population of Artificials (or whatever other non-sexbot name you want to call them) assist in letting the guests do whatever they want. No matter what mortal sin is done to the androids, which are seemingly far more human than machine, they’re rebooted each night and each day begins with them going on about the same pre-programmed day, with different people adding to it as it goes on.

The comparisons to Westworld are inevitable but essentially needless, as this is more like a young adult novelization of that film. The first sentence I wrote in the paragraph above is delivered in an effective and colorful opening title sequence, which basically uses headlines and images to build the world up. The second sentence is delivered through some ridiculously clunky exposition from one bot-surgeon to another, as if the other guy legitimately hadn’t been told a thing about his job before he took it. “Wanna work on sexy girls?” “Sure!”

The subject matter is admittedly ripe for deeper inspection, and the first 10 minutes of Vice deal with that more interesting issue, which seems like it’s more about how non-sadistic human beings are reacting to this murder-and-rape fest, which is basically what Vice is. While the main halls and offices of Vice are clean and swanky affairs, the movie portrays its best customers as always-erect psychos whose version of Fuck, Marry, Kill drops the Marry part and intertwines the Kill with the Fuck. I guess it’s somewhat disturbing that I thought expounding upon that topic would be more interesting.

In any case, Vice is more interested in telling the story of an Artificial named Kelly (Childers) who wants out of that mess. She begins to remember things about her past experiences, which involve a lot of raping and killing. And that means she will escape! But they won’t let her go easily! Gunfight! Gunfight! Explosion!

Sauntering throughout all of this is Thomas Jane’s Detective Roy, whose long hair and blasé attitude towards his superiors and Vice must mean a non-pacifist hippie movement is due in the future once robots feel emotions. Roy isn’t supposed to be so interested in Vice, but that’s pretty much the only thing he’s ever concerned with. Even though Jane’s performance also seems to reflect his enjoyment of starring in this film, Jane is probably the best thing happening in this cast, though Childers’ wide-eyed robot puberty isn’t that bad. (Willis just looks like he’s accepted that his paychecks aren’t as much as they used to be.)

Vice is the third film of Brian A. Miller’s to be released in the past 10 months, along with The Outsider and The Prince, the latter of which also starred Willis and was also written by Andrew Fabrizio and Jeremy Passmore. Miller’s direction is constantly in motion and manages at times to look like the movies that inspired him. Like a calling card that has Thomas Jane on it, chewing a toothpick and saying, “My gun is huge.” Had there been a more substantial story being told, Miller might have come out looking like the hero here.

When all is said and done, Vice feels almost like a man-hater’s idea of what men are always thinking about. Considering two men wrote it, I guess that wouldn’t be so far off, but it’s still an unimaginative trip through a world that has far more promising stories to tell. 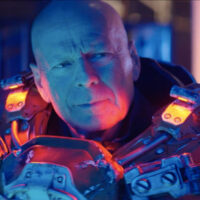