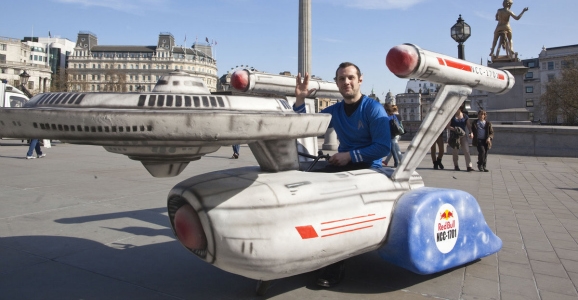 According to Damn Geeky, the soapbox racer took Rob Wixey two months to build, using a steel framework “welded to a bike cut in half having inverted handlebars for ease in steering.” The rest of the Soapbox Starship is made of plywood and polystyrene, coated in fiberglass and custom to look like Captain Kirk’s sweet ride. Wixey is entering the soapbox Enterprise for the Red Bull Soapbox Race, which is warping to London’s Alexandra Palace on July 14. Here’s what Wixey has to say of his home-made Enterprise racer after the premiere:

Only yesterday I entered into a sci-fi short film contest judged by Benedict Cumberbatch and now I will be watching the Star Trek premiere with him — the whole experience is overwhelming. Now I can’t wait for the Red Bull Soapbox event, maybe some of the Star Trek cast will come down and cheer me on!

People’s reactions to the Starship today have been brilliant — they loved it. I have such an admiration for JJ Abrams and it’s great to be part of the premiere.

The Red Bull Soapbox Race is an annual race in Europe, Hong Kong, Japan, and the United States, which celebrates creativity and fun more than competition and winning. Participants from all around the world come together in the spirit of having a good time to race each other in homemade soapbox racers.

Rob Wixey’s Star Trek soapbox racer is mighty impressive, and it looks like it is built to last. It’s pedal-powered, though, so we’re not sure it can reach warp speed.