When John’s (Scott Adkins) family is murdered in front of him, he sets out on a quest to find the man who pulled the trigger, Luc Deveraux (Jean-Claude Van Damme). His journey takes him to some dark, unexpected places. That’s the basic plot to Universal Soldier: Day of Reckoning, the latest installment in a franchise that began in 1992. The film, however, takes that simple premise and buries it beneath a big ol’ pile of crazy. Like Van Damme looking like psychotic clown crazy. 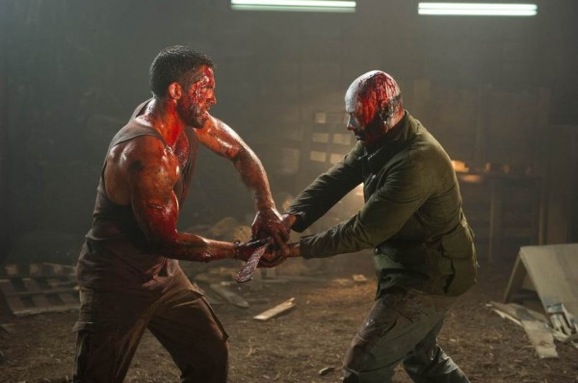 Day of Reckoning is also going someplace that a Universal Soldier movie hasn’t been in a long time: theaters. While it has been available on demand since October, November 30th will see the UniSols invading movie houses nationwide. Most of the films, including the last chapter, Regeneration—which emerged from obscurity and put the series back on the action map—have gone directly to video, or been produced for cable, with only the most tenuous connection to the rest of the canon.

After an opening scene that involves a crying child, strobe-heavy lighting effects, and shocking brutality, Day of Reckoning morphs into a badass action riff on Apocalypse Now. And that isn’t meant to be hyperbole. This is a hallucinatory journey up that metaphorical—and sometimes very literal—river. John thinks he knows himself, knows who he is, but the deeper he digs, the more his life, personality, and sanity all unravel. Is he the truck-driving family man he thinks he is, or is he a guy capable of beating a man to death in a strip club parking lot?

John sees things, his memory slips, Deveraux appears before him in stroke-inducing bursts of strobe lights, only to melt into his sidekick, Andrew Scott (Dolph Lundgren), and back again. As all of this goes on, you see Deveraux, in full Colonel Kurtz mode, as the esoteric demigod at the head of a self-actualizing cult of UniSols. They’re attempting to free themselves through self-empowerment, and begin replicating in their dank underground hideout. 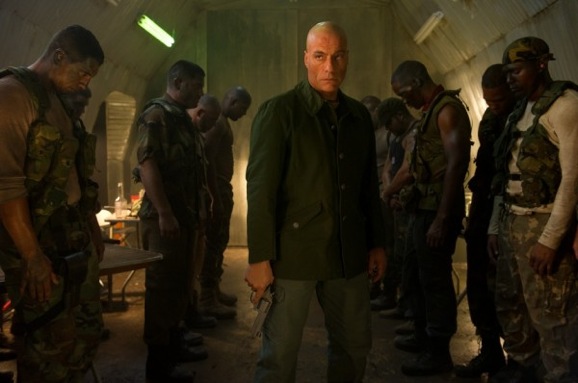 From beginning to end, writer/director John Hyams superimposes the framework of Coppola’s classic war film—and thus Joseph Conrad’s novel Heart of Darkness—onto the world of genetically altered super soldiers that have been revived from the dead. In a way, the UniSols are a sci-fi variant of zombies. It’s clever, the way Hyams takes the details of the franchise and fits them into the structure, setting events in motion, and steering them step for step.

Beyond the obvious stylistic and thematic flourishes from Apocalypse Now, Hyams lift iconic tropes from a variety of films and filmmakers. There are long push shots down hallways that are straight out of Kubrick, especially The Shinning. John Woo, The Terminator, and Pinocchio—yes, Pinocchio—all make momentary appearances.

Even with everything else going on, with all of the psychedelic trimmings, Day of Reckoning is primarily about the action. Adkins is one of, if not the top action star working today. He’s carrying the mantle for the likes of Van Damme, Lundgren, Stallone, and that ilk. We’re not talking the frantic, videogame-influenced, CGI-heavy action that makes it to theaters these days. This is a throwback to a time when action scenes were actually scenes, not a string of half-second shots strung together in rapid succession. 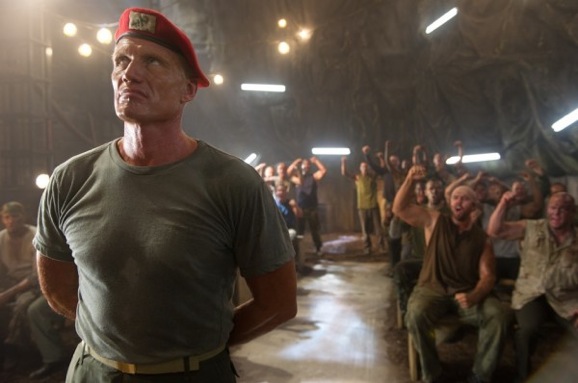 When John and Magnus (former UFC heavyweight champ, Andrei Arlovski) come to blows, it looks like two guys who know how to fight actually throwing down. One especially noteworthy and impressive moment near the end is a single continuous shot of John rampaging his way through a maze of underground tunnels. An apparently unbroken sequence (if you know where to look, or have seen Rope enough times, then you know where the cuts are), Adkins erupts in a series of bullets, fists, and limb breaking, until his white tank top is so saturated in blood all you can see is red.

Day of Reckoning is an overly violent mess of gory revenge, kill-crazy rampages in a day-glo UniSol brothel, and an awesome brain-drilling scene. The pace does sag for a moment in the middle, and some of the extras shouldn’t have been allowed to talk—not even to say things like “Stay the fuck out,” and “Get your hands off her.” But if you’re a fan of this type of action, especially if you enjoy the work of anyone in this movie, then this should be right up your alley. Insane, esoteric, weirdly dense, and wanting in the logic department, Universal Soldier: Day of Reckoning is a damn blast.

Three and a half stars out of five.