At this rate my fingertips will be bleeding all over the typewriter before too much longer. We had barely finished posting the breaking story about Disney’s purchase of Lucasfilm, including the Star Wars franchise, before more news arrived by way of a conference call between Disney investors and Disney chair Bob Iger. Not only is Disney planning Star Wars VII for 2015 — they’re planning Episodes VIII and IX as well.

Our sister site, Cinema Blend, got the skinny on the conference call announcement, where Iger said that they will be releasing the next three Star Wars movies in two-year increments, meaning we’ll be getting new Star Wars throughout the back half of this decade, and a few years on into the next. And that’s assuming that they stop at Episode IX, which there is no real reason to think.

It’s still not clear what George Lucas’ role as “creative consultant” will entail, but it seems unlikely that he’d be directing the new films, or even be involved in the day-to-day running of the franchise. At this point, I think the guy has earned a retirement. While some GFR readers are already crying foul and weeping in our comments section over on Facebook, I’m regarding this as a tentatively positive development for two simple reasons: 1) I think the prequels, as well as Lucas’ refusal to release the original, unaltered Star Wars films on Blu-ray and DVD, showed that Lucas had lost touch with what elements of Star Wars made the fans fall in love with the movies in the first place. And 2), I really, really want to see a Star Wars movie made by a top-tier director like Christopher Nolan. Think of the way Nolan reinvigorated the floundering Batman franchise, and just imagine if he or some other talented person brought a new energy and excitement to a universe that left many fans stung and bitter in the wake of the prequels.

Even better news: since they’re referring to them specifically as Episodes VII, VIII, and IX, that suggests they aren’t planning the one thing that would genuinely be cause for concern: an outright reboot.

At this point, the new films could be almost anything. It could be an adaptation of Timothy Zahn’s “Thrawn” novels. It could be an entirely new adventure starring the old cast, or brand new story with only a few direct connections to what came before. There’s no telling, but I am genuinely excited to find out. 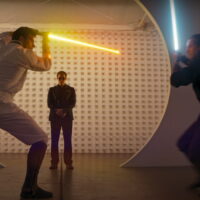