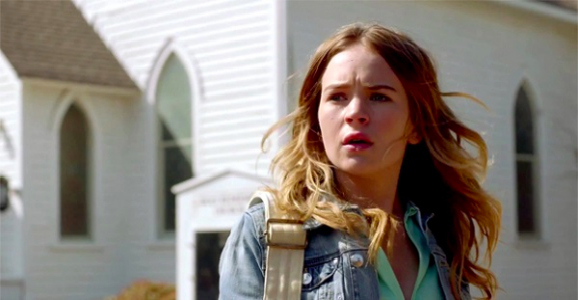 The secretive sci-fi film project Tomorrowland is still in pre-production as director Brad Bird and screenwriter Damon Lindelof continue to fill out the cast. George Clooney stars as Frank Walker, a grizzled inventor; Hugh Laurie plays the film’s villain, David Nix; and newcomer Raffey Cassidy is slated to play a robot, Athena, central to the plot. The film has been shrouded in mystery, but it’s expected to be one of Disney’s biggest releases in 2014. The cast of Tomorrowland must be damn near finished, especially now that Under The Dome actor Britt Robertson has been cast as the female lead.

According to Cinema Blend, Robertson will follow up the TV adaptation of Stephen King’s best-selling novel by appearing in Bird’s film. Her character is named Casey Newton, and is described as “a high school girl with an unconventional understanding of technology” who “is launched on a journey to reclaim her future.”

Beyond that, not much is known about the film, though it is believed to be about the theme park, or at least some aspect of it, at Disneyland. Lindelof (Star Trek Into Darkness, Prometheus) explained that his hope for Tomorrowland is to give the theme park a narrative, just like Gore Verbinski did for Pirates of the Caribbean 10 years ago with The Curse of the Black Pearl. Before the movie, Pirates was just a ride, and now, people think the movies were the basis of the ride. Considering Lindelof’s pension for secrecy, we probably won’t know the whole story until we actually see the movie for ourselves, in December 2014.

Robertson is currently being held hostage against her will in a bomb shelter on Under The Dome every Monday. Aside from that, she’s mostly known for her TV work, including Life Unexpected and The Secret Circle, but has appeared in a movies such as Scream 4 and Dan in Real Life.

Tomorrowland is Bird’s follow up to his live-action debut Mission: Impossible – Ghost Protocol in 2011, though he is a legend in animation circles. With feature films like 1999’s The Iron Giant to his credit, he’s also helped revolutionize the genre with Pixar films like The Incredibles and Ratatouille. The Academy Award winner even turned down the director’s job for Star Wars: Episode VII, opting to helm Tomorrowland instead.

Since the film’s announcement, Bird and Lindelof have been teasing bits and pieces about the narrative to their fans. Lindelof tweeted a few images of (literally) a mystery box with the label “1952” (the film’s then working title) on it. The Disney blog D23 examined and cataloged almost every photo, comic book, movie reel, and other piece memorabilia inside of the box. It’s also believed that Tomorrowland will be similar to Steven Spielberg’s 1977 film Close Encounters of the Third Kind, in terms of the family drama, though not necessarily the alien invasion angle.