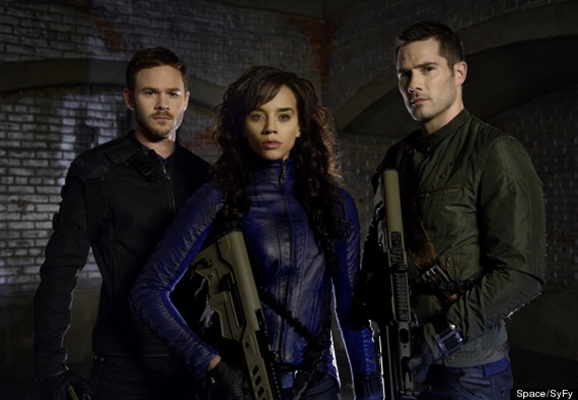 Syfy is in the middle of a creative renaissance ever since Bill McGoldrick, the network’s new-ish executive vice president of original programming, declared that not only would the network be putting a renewed focus on actual science fiction programming, but that he wanted content that could compete with well-respected cable titans like AMC and HBO. It’s still too early to judge how well this ambitious plan will work, but Syfy has definitely been making all the right moves lately, greenlighting series based on popular SF works such as James S.A. Corey’s Expanse series, John Scalzi’s Old Man’s War books, and Arthur C. Clarke’s Childhood’s End. One project that hasn’t been quite as high on our radar is Killjoys, an action/drama about a trio of interplanetary bounty hunters, and that’s at least partly because we simply don’t know that much about it yet. Well, now we can at least scratch “what do the leads look like?” off our list of questions, thanks to the newly released cast photo up top.

Like the excellent Continuum, Killjoys is a joint Canadian/American production, with Syfy teaming up with the Space network from the Great White North. Killjoys is the brainchild of Michelle Lovretta, who also created Lost Girl. Killjoys is also being produced by Temple Street Productions, the production company responsible for one of the best new science fiction series in ages, BBC America’s Orphan Black. I’m ambivalent about Lost Girl, but the Orphan Black cred does earn the show my attention.

So what is Killjoys all about? From left to right in the photo, Aaron Ashmore, Hannah John-Kamen, and Luke Macfarlane star as a team of bounty hunters operating throughout a region of space known as the Quad, described as “a distant planetary system on the brink of a bloody, class war.” It’s not clear yet if Killjoys is set in the future or if it’s just about aliens who happen to look human.

John-Kamen swipes from Predator as the squad’s leader, a lady named Dutch. The Huffington Post describes her like so:

A top-level Killjoy, she’s a much-loved and charming presence in her community, with a unique gift for earning people’s trust and respect regardless of their class. Under her banter and protective flirtations, there is pain, maturity, and a deep solemnity resulting from a dark, secret past.

Ashmore, whose mug you may recognize from Smallville and Warehouse 13, is playing a Level 3 Killjoy (whatever that means) named John Jaqobis. Described as a “peacemaker who hates conflict,” he sounds like he is clearly in the wrong line of work:

Cheerful and kind-hearted, John prefers not to fight, but his sarcastic wit has put him into the fray enough over the years to teach him how to do it well, and dirty. Give this man any machine or situation, and he can fix it, build it, and fly it.

…handsome, rugged, sarcastic, and incredibly loyal former soldier. He dreamed of enlisting in the military since boyhood, and his hard-won expertise in tactics, manoeuvres, and hand-to-hand combat make him an instant asset to the Killjoy team.

If this material is handled the right way, Killjoys could be a rollicking good time in the vein of Farscape, Firefly, and Guardians of the Galaxy. Some of the most beloved science fiction characters of all time are rogues, smugglers, and pirates, ground-level hustlers just trying to make a living in a big, unforgiving universe. Hopefully Killjoys will find a nice mix between action, drama, and levity, and give Boba Fett fans something to mainline until the actual Boba Fett spinoff movie hits theaters. Killjoys is still nowhere near the top of our list of most-anticipated Syfy projects, but we’ll be keeping our fingers crossed that it proves to be a pleasant surprise.

Killjoys will premiere on Space and Syfy sometime in 2015.