Over the next few months, Syfy is definitely upping their game. Next week you have the big event miniseries Ascension kicking off, Helix returns to your TV screen early next year, and on January 16, you’ll finally get a look at their adaptation of 12 Monkeys. To hype that particular series, the network has released this new featurette to give you a better idea of the world you’re walking into.

Like Terry Gilliam’s 1995 time travel film, this 12 Monkeys revolves around James Cole (Aaron Stanford), a man from the future, sent back in time in order to stop a plague that wipes out most of the human race and forces the remnants to struggle for survival. On his journey, he meets Dr. Cassandra Railly (Amanda Schull), and enlists her help to save the human race from a dismal, post-apocalyptic future. As you probably guessed, there also appears to be some romance in the air.

This behind-the-scenes look at the series goes into more depth about the relationship between Cole and Railly (played by Bruce Willis and Madeleine Stowe, though with a less on the nose name, in the film). They form a strong bond and she fights to do everything she can in order to head off this disaster. This video lays out the plot, as well as gives you a glimpse of the grim, screwed up world of the future, and it looks suitably bleak for a situation such as this.

While the surface details are fairly similar—for instance, there’s the Army of the 12 Monkeys, headed by Tom Noonan, and Cole meets an unstable inmate at a mental institution named Goines (only this time it’s a woman named Jennifer, played by Emily Hampshire, instead of Jeffrey, played to wing nut perfection by Brad Pitt)—there are significant changes. In the film, Cole is caught in a static loop of time, unable to create change in the future, no matter what he does. That isn’t the case here. This is one of the big themes of the first film, so we’ll have to wait and see how it alters the landscape of the story, though it seems like it will have a substantial impact.

Check out the trailer below:

I’m really curious to see this new 12 Monkeys. Gilliam’s film is one of my all time favorites, and I really hope that Syfy doesn’t fuck it up. I don’t really care that they remake the movie blow-by-blow or anything like that, just that they do something interesting with the source material. One thing this new version appears to lack is the inherent strangeness and warped humor. Granted, those are trademarks of Gilliam as a filmmaker, and are hard to ape, but from what we’ve seen, which is admittedly not much, this appears damn near humorless. That doesn’t mean it’ll be bad, just very different. And until we can see it for ourselves, we’re going to keep our minds open and our hopes high. 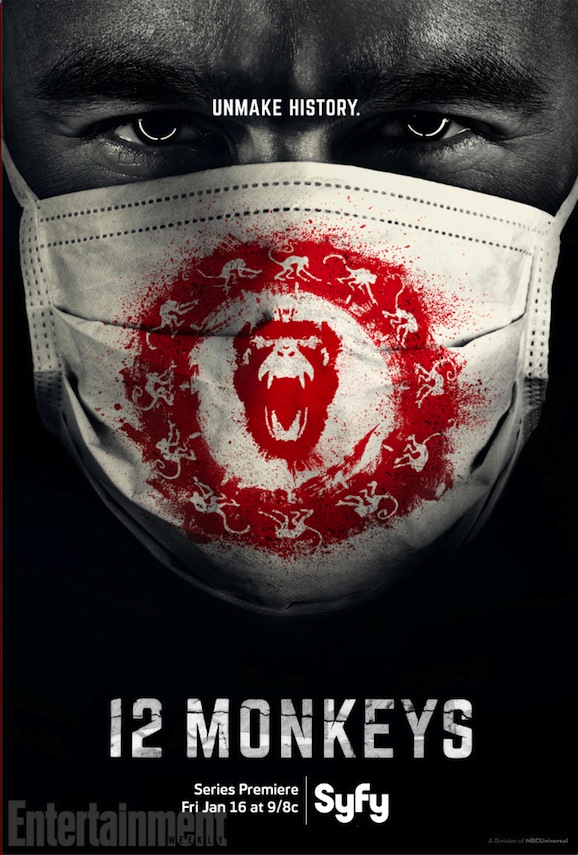