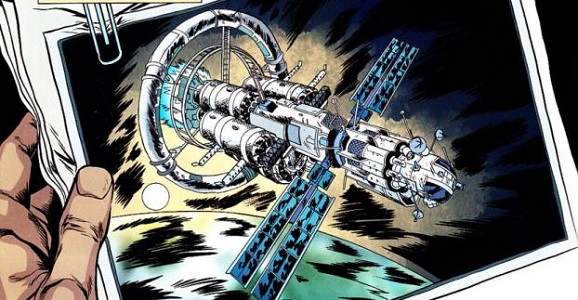 Letter 44
At just six issues, Charles Soule and Alberto Alburquerque’s futuristic political space thriller Letter 44 has inspired all of the feelings that one would expect from such a story. As soon as Stephen Blades, the 44th President of the United States, arrives at the White House, he finds a letter from his predecessor that describes a clandestine one-way space mission whose crew discovered a gigantic piece of alien technology. While he’s also responsible for the many problems the 43rd President racked up while in office, Blades is also mired in implications of extraterrestrials and what can be done about it.

The other half of Letter 44 revolves around the spaceship Clarke and its enjoyable crew of scientists and military men. Events began happening to them that aren’t worth going into here, but suffice to say drama has no easy solution when it’s taking place over 100,000,000 miles from Earth. While some may not enjoy the comic’s wordiness, it’s hard to argue the sci-fi grandness of every development, and Syfy could have themselves one of the most high-minded thrillers on TV if writer/director Jonathan Mostow (U-571, Terminator 3: Rise of the Machines) plays it right. (You can read our first article about Letter 44 right here.)

While there’s nothing inherently nerve-racking about Syfy telling another story of catastrophes in the cosmos, even in an upcoming season full of space drama, there’s a big part of me that can’t help but be fearful of the network’s version of political conspiracies and government matters. Without the perfect actors, Letter 44’s hamminess could go through the roof. Luckily, this isn’t just another men-in-black story of worldwide cover-ups, but I worry that in fleshing the story out to make the series, those trite stereotypes will quickly creep their way into it. – Nick