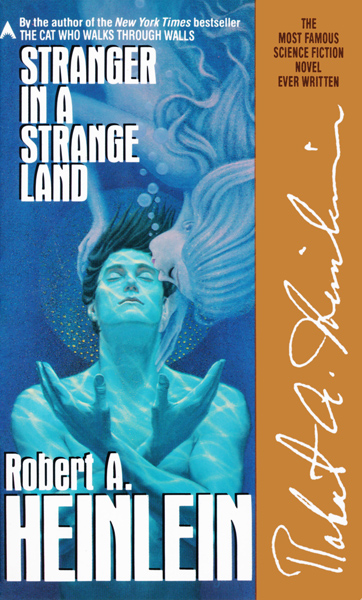 I love Robert Heinlein’s 1961 sci-fi classic Stranger in a Strange Land, but I embarked on this review by admitting that it is by no means a perfect book. Many people prefer some (if not all) of Heinlein’s other books. While 438 pages isn’t a lot by sci-fi/fantasy standards, it feels like a lot more if the tone, sexism, and other counterculture ideas in the book don’t work for a reader. But for me, the length of the book reveals the depth of Heinlein’s narrative talents.

The premise isn’t really all that science fictional: Valentine Michael Smith was born human but raised on Mars (by Martians), and then comes to Earth as a young adult. Sure, it involves Martians and space travel between planets, but at its heart, the book is an exploration of society. It updates Rudyard Kipling’s question by asking what happens to a man raised on another planet when he makes his way back to Earth?

The answer to that question, of course, is complicated and messy. Mike is about as different from the average human as Mowgli is in The Jungle Book. He returns to Earth against his will, where he can’t breathe well and struggles against the gravity. He’s also has never encountered a female before, and as you can imagine, he’s quite taken by them. A female nurse, Jill, is the first human he shares water with—a ritual akin to breaking bread with someone on Mars, but with more overt spiritual implications. It’s actually more like becoming blood brothers, a bond that links people together forever.

Smith’s presence on Earth triggers a big political fiasco. As the only survivor of an earlier human expedition to Mars, he seems to have full ownership of the Red Planet (in the book, the Outer Space Treaty has been replaced by the “Larkin Decision,” which followed human colonization of the moon). Now that he’s identified as rich and powerful, he becomes a political target, which results in agents chasing him around and trying to nab him. In one of the first real sci-fi sequences of the book, Mike shows how Martians kill assholes—by essentially de-existing them, or somehow vaporizing them into another dimension. It’s revealed that Mike has some serious telekinetic and telepathic powers, and those become his main weapons throughout the book.

Mike and the nurse seek refuse with a doctor, lawyer, philosopher, author dude named Jubal Harshaw, who’s got a harem of women who run his home and, really, his life. And here’s where the sexism comes in. He orders these ladies around, pats them on the ass, and speaks to them in a way that would precipitate a lawsuit if it happened in today’s world. While it’s an issue for some, even as a female reader, it’s not too difficult to let this go. I don’t care if Heinlein was sexist or not (for me, it’s not on the same scale as Orson Scott Card being a vocal homophobe, though I won’t boycott Card’s work either). Jubal is a character, not a mouthpiece for Heinlein, and he’s an old school guy. For all his smarts, he’s unable to attend to all kinds of practical stuff, such as putting a meal on the table, so while I understand his behavior annoying some readers, it’s believable and not all that off-putting.

Then there’s all the sex. Mike sleeps with Jill, and it’s really kind of lovely. He’s like a child, innocent and loving to a degree that seems pretty impossible for humans to attain. He has some phrases to convey this feeling, namely “thou art God.” God isn’t a single divine being—it’s one who is connected to all other organisms, one who “groks,” or deeply and inherently understands all living organisms. Sex becomes another way of grokking someone. Juxtapose this kind of sweet naiveté with human war, materialism, envy, and you’ve got your stranger in a very strange land indeed. Heinlein masters the art of letting the reader view humans and humanity through an alien’s eyes, and one of the most successful aspects of the book is the extent to which humanity seems both inexplicable and, often, awful.

One of the most interesting aspects of the book is the development and importance of religion on Earth, having risen to prominence after a third world war. The way religions function in the book is a lot like the way corporations function in science fiction stories such as Continuum—they’ve essentially eclipsed the government as the agencies of power, and they’re every bit as corrupt. And, as corporations do, they court Mike, who explores a bunch of different religions, including the Fosterite Church of the New Revelation.

Now, this church isn’t what you’d expect—and it can’t be, if it’s going to realistically occupy the position of prominence it does in the book. This church condones sex, gambling, and drinking, among other vices. Actually, it sounds a bit like scientology in that is has an outer circle, a middle circle (these are the folks who prop up the church’s finances), and a powerful inner circle (but thankfully, Tom Cruise isn’t in this one). Inspired by the church, Mike eventually starts his own religion, the “Church of All Worlds,” which features lots of sex and orgies, along with water-sharing and grokking. He also teaches members telepathy and telekinesis, which rankles some folks on the outside.

What makes Stranger in a Strange Land so unique is its ambitious scope. Heinlein explores religion, philosophy, politics, sociology, sex, enlightenment, and much more. While the book annoyed its fair share of readers with some of these ideas and the smugness of some of the characters, it deservedly received the 1962 Hugo Award for Best Novel. The plot is really secondary to the exploration of ideas here—readers can learn a lot from them, much like the humans learn a lot from Mike. There are a lot of worthwhile ideas, and many resonate even more now than they did in the 1960s.