We know that at some point in the current season—the seventh—of the BBC’s long-running sci-fi adventure series Doctor Who, the Time Lord’s current companions are leaving. While it will be sad to see Rory (Arthur Darvill) and Amy Pond (Karen Gillan) go, with this show that’s the nature of the beast.

Change is a constant in the Who-niverse, and so we’ll get to meet the Doctor’s (Matt Smith) new companion, played by Jenna-Louise Coleman, in the Christmas special. Not much has been said about what the change will entail, but showrunner Steven Moffat recently sat down with SFX and let fly.

The Doctor definitely has a strong connection to his current companions, and Moffat promises the change takes these feelings into consideration. They’re not simply looking to pull a quick change. He says:

We are going to do the story properly of the Doctor having lost a friend and making a new one. We’re not taking that lightly. It’s not in one door out the other. It’s the story of how all that affects him, why he engages with somebody else and what’s going on with that—that’s all important.

Introducing a new character automatically changes the dynamics of the show, because both the characters and actors who play them have a different chemistry that indelibly alters things. Moffat acknowledges how the companions play a large part in developing the personality of the Doctor. As much as Amy’s presence currently shapes the Doctor, Coleman’s arrival will have a similar impact.

What does Jenna bring to it? It’s surprising just how much the show changes with a new co-star. The Doctor is quite different with her, and the way you watch them is quite different. You watched the Eleventh Doctor and Amy arrive together. It’s like they grew up in the same sandpit, playing. They felt not quite like equals – the Doctor never feels like an equal to his companion – but you knew them equally well and they were equally important to each other. They formed around each other. And one of the interesting things about writing the Doctor is that he’s so responsive to the people around him. It’s almost like left on his own his personality would slowly disintegrate. He becomes what people want him to be, a little bit. So he’s Amy’s Raggedy Doctor.

Moffat notes that the Doctor “becomes a slightly different man,” with the new companion. This includes everything from the way he acts, to how he dresses, to how tall people will think he is (Smith is significantly taller than Coleman, but about the same height as Gillan).

With new characters at his side, the Doc has almost reverted to a previous self. Moffat likens the recent incarnation to an adopted child of Amy and Rory, as a sort of troubled youngster they have to look out for and take care of. However, in his new relationship, “he’s back to being the mysterious spacefarer.”

So we can plan on seeing a pretty big shift in the landscape of Doctor Who. The changes are exciting, but scary at the same time. When a show you love undergoes such a huge shift, such a significant revison, there’s always the concern that the product will suffer irreparable damage. Moffat seems to be pretty psyched about the impending alterations, though, and his enthusiasm is certainly infectious. After all, reinvention is the name of the game.

And this never goes away, this thrill – you want to see the reaction when you see it’s bigger on the inside, you want to see the count the hearts moment, you want the story to begin again. And that’s what it gives you. It gives you Doctor Who at its most iconic, because a new person is having to learn the rules—and you’ve seen that story how many times now? I don’t think you ever get tired of it. 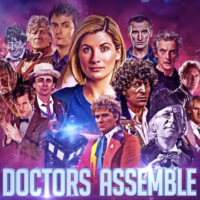