Jokes about The CW’s endless parade of teenage angst and improbably beautiful people, you have to respect the network’s commitment to genre programming. From The Vampire Diaries to Arrow to that Beauty & the Beast remake I guess somebody must be watching, The CW’s lineup is chockablock with fantasy, science fiction, and superheroics. The network has two more science fiction projects set to debut in the near future: Star-Crossed, which premieres on February 17, and The 100, which arrives on March 19. Now The CW has released some high-quality stills from both pilots. (You can click the images for larger versions)

Appropriately enough for a show that’s bowing just after Valentine’s Day, Star-Crossed is essentially your basic Romeo & Juliet story but with aliens. In the vein of Alien Nation or District 9, Star-Crossed has alien visitors crash land on Earth. During the hectic aftermath, a young girl named Emery (Aimee Teegarden) meets an alien lad named Roman (Matt Lanter). He’s soon dragged off with the rest of his people and herded into internment camps. The main story picks up 10 years later, as the alien Atrians are being integrated into human society. Naturally, Roman and Emery cross each other’s path again, and romance ensues. You can see stills from Star-Crossed above and below, as well as a teaser trailer for the show. The 100 is set a century after our benighted species lobs nukes at each other and basically exterminates human society across the face of the planet. Thankfully some humans do survive: the populations of 12 orbiting space stations. Ninety-seven years after the nuclear holocaust, the head honchos of the orbital human community decide it’s time to see if the surface of our homeworld has become any more hospitable. Their solution? Send down 100 expendable juvenile delinquents and see what happens. Which just seems impractical to me. If you’re going to use 100 of them, at least drop them in various places around the world so you can get a wider data set. But whatever. We’ve got stills and a trailer below. What do you think, will you be tuning in for either of these shows? 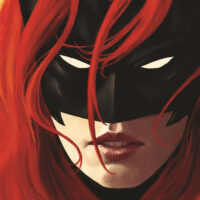