If you’re like us, you can’t get enough Star Wars right now. We’ve been watching that Star War: The Force Awakens trailer on repeat since the day after Thanksgiving (okay, we’ve been cutting it with that Mad Max: Fury Road trailer the last couple of days), and we spent most of last night trying to figure out what those character names that were revealed yesterday can tell us. (The answer is not much by the way.) And now we know that the new expansion of Star Wars isn’t going to be limited to traditional entertainment options like film, TV, comics, and books, but the new films will also be incorporated into Disney’s theme parks.

Walt Disney chief Bob Iger told Variety that the upcoming attractions won’t be based on any of the already extant films—no original trilogy, not even the prequels, sorry George Lucas—but will focus on the new movies, both Episode films like The Force Awakens and the spinoffs, like the ones that Gareth Edwards and Josh Trank will direct.

This meant that the company waited longer to start developing the rides, until J.J. Abrams unveiled his plans for the next film. The reasoning is that Disney didn’t want people to go see the new film then go to the parks and be disappointed because the rides were based on old stuff. People hate old stuff. Iger said, “I didn’t want someone to say, ‘I just saw the movie and there’s nothing in that movie in this (attraction). We waited to see what this film would have in it.”

That makes sense to a degree. There will likely be a number of people for whom The Force Awakens is their first real exposure to Star Wars, but at the same time, it also discounts the generations, plural, that already have a deep, passionate love for the franchise. I guess we’ve already got Star Tours to hang our hats on, but the aim is definitely to entice younger fans.

Iger continued, “We couldn’t tell them what was new. I slowed it all down so what we come forward with will have a blend of the past, present and maybe the future. Now we have a sense of what’s in ‘Star Wars 8,’ and what some of the standalone films will have in them.”

The rides and attractions, whatever they may be, owe a debt to the use of physical sets and special effects in the new movie, and will incorporate many of those elements. Iger called the use of CGI in films today “too easy, and said, “There’s a sameness to a lot of these films today. The wow factor isn’t what it used to be. J.J. decided to create the physical wow factor.”

Those are definitely promising words to hear for those of us who still have nightmares about the greenscreen mess of the prequels. Iger added, “That will give the film a look that will be extremely respectful of the look George (Lucas) created in the ’70s, and will play well with ardent ‘Star Wars’ fans and play well with audiences today.” 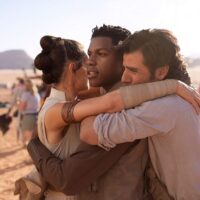 The Next Star Wars Movie: Lucasfilm Has Chosen A Director