Star Wars: Episode VII: This Is What Daisy Ridley’s Character May Look Like Thus far we’ve only seen bits and pieces from Star War: Episode VII. For example, we know they filmed on the picturesque Irish isle Skellig Michael, we’ve seen peeks at some of the practical effects they’ll be using (like that little puppet guy, a different take on the X-Wing Fighter, and half a Millennium Falcon), and even some concept designs for what fashionable stormtrooper and Han Solo could be wearing come winter 2015. There have been unsubstantiated rumblings about franchise newcomer Daisy Ridley’s character and role, and while we don’t know much on that front, now we have a better idea of what her outfits may look like.

We’ll probably be discussing some potentially SPOILER-Y things beyond this point. Make of that information what you will.

Over the last few months there have been all kinds of rumors surrounding Ridley. We’ve heard that she, along with fellow newbie John Boyega, will be part of a part of the main duo of Episode VII. The two will supposedly be on a journey that will see them encounter Han Solo and Chewbacca, as well as look for the owner of wayward lightsaber, which could belong to the long missing Luke Skywalker. To that end, we’ve also heard that she may be Han and Leia’s daughter, which would certainly explain the encounter with dear old dad. At this stage in the game, Ridley is also the only actor that we know will appear in all three of the impending Episode movies (Episode VIII is slated to be written and directed by Looper’s Rian Johnson, and Episode IX may be). None of that is certain (except for the Johnson bit), it’s all unsubstantiated hearsay, but it’s a lot to consider. But if she is involved in a space adventure, and let’s face it, just about everyone in the Star Wars universe is at one point or another. And if that’s the case, she’ll need some adventure appropriate gear, which it certainly looks like she has in this first piece of concept art that popped up over at Making Star Wars. She looks straight up decked out. Whether or not all those toys will make it to the end of the movie is doubtful, but it’s nice to have and not need rather than need and not have. And if you’re wondering what all of those things are, there’s this annotated picture, which is just the same as the first, but with a handy dandy key that points out what each piece of gear actually is. She’s got all kinds of pads and protection, you get an idea of the color scheme (brown leather straps and a bright blue scarf, which doesn’t seem like it would provide much camouflage), and then there’s a lightsaber, yes, a lightsaber.

That last detail, if true, could be very telling. This jives with the idea that she found herself in possession of one of favored weapons of the Jedi Knights. If she is indeed Leia’s daughter, she could have a natural aptitude with such a device, much like Uncle Luke. Then again, it could be that this is Star Wars and maybe whoever drew this was just putting lightsabers everywhere. Like everything, we’ll wait and see on December 18, 2015, when Episode VII opens, but again, something to think about.

Whatever her role winds up being, Ridley is shaping up to be kind of a badass, and she certainly looks the part in this final picture. There’s a definite “bring it” vibe radiating from this drawing. And though I doubt that’s what it really is, it looks like she’s clutching a whip, perhaps a nod to potential onscreen dad Harrison Ford’s other notable job as Indiana Jones.

All in all, these pictures make her look rather Star Wars-y. Wearing this get up, she could easily be one of the extras from the Battle of Endor. 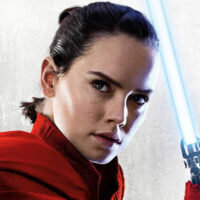