Star Trek: Rick Berman Tweets Out A Photo On An Unproduced Next Generation Script When your franchise has been going on for almost fifty years, like Star Trek, there are going to be plenty of missed opportunities. Shows have been cancelled, stories have been left untold, and movies have been left unmade. One example of this is a never seen script for a solo Star Trek: The Next Generation that, while it was written in 1993—at least a first draft was finished in 93—never came to fruition.

Star Trek: The Next Generation—The Movie was penned by Rick Berman, who tweeted out this picture of the cover page just the other day, and Maurice Hurley, who both notably served as producers on the series over its seven-season, 178-episode run. Okay, that’s not entirely how it went down, Berman and Hurley tag teamed the idea, but when then Hurley, who filled the head writer slot on the series for a number of years, went solo for the screenplay.

According to Berman, this script, while obviously never produced, was “never seen.” How accurate that is, I’m not sure, because if you follow the comments and replies below the original tweet responses range from people who claim to have read this and have a copy of it, and others who say it was summarized in a magazine back in the mid 90s.

If one of these fans is correct, there is a scene that involves Patrick Stewart’s Jean-Luc Picard calling up William Shatner’s James T. Kirk on the holodek. While not exactly the same, the two captains, and their two separate crews, do come into contact with one another in Star Trek Generations. Berman also helped flesh out the story for that film, which opened in theaters in 1994, so it’s possible he recycled a moment or two from the earlier script.

I wouldn’t put it past some enterprising Trek fans to have gotten their mitts on a copy of this somehow. They’re a passionate, driven, resourceful bunch that will go to damn near any lengths to get their hands on an artifact like this. I can’t help but imagine a scenario where there was some breaking and entering, or perhaps they went through Berman or Hurley’s garbage and pieced the entire thing together from the long strips of paper left over after a copy went through a paper shredder. There’s likely a much more mundane story than that, but my version is way more entertaining. Though this particular movie—which Berman says, “Wasn’t half bad”—never got made, the crew from The Next Generation did go on to appear in a number of movies. I already mentioned Generations, but that was followed by Star Trek: First Contact in 1996, Star Trek: Insurrection in 1998, and Star Trek: Nemesis in 2002. So don’t feel too bad for them, they got plenty of face time on the silver screen.

But still, as we speak, die hard Trekkies (or Trekkers if that’s your preferred nomenclature) are probably setting their sights on this script, trying to figure out a plan to add this script to their memorabilia collection, tenting their fingers like Mr. Burns, and laughing manically. If someone does get their hands on this, maybe we’ll be able to sneak a peek before Paramount or whoever owns the rights to TNG demands it be taken down. 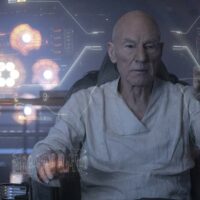