Last Friday we here at GFR had the privilege of premiering two of Juan Ortiz’s amazing retro Star Trek posters, including a truly epic bit of moustachery in the form of his “I, Mudd” poster. Now StarTrek.com has posted the remaining two posters for the month, for the episodes “A Private Little War” and “The Conscience of the King.”

For those not in the know, artist Juan Ortiz has spent the past year or so creating retro-style poster prints for every single one of Star Trek: The Original Series’ 80 episodes. They are some of our favorite things here at GFR, and it’s always exciting to see what approach Ortiz will take with each new batch of episodes. Check out the latest posters — for “A Private Little War,” “I, Mudd,” “By Any Other Name,” and “The Conscience of the King” below, along with Ortiz’s commentary from StarTrek.com. We’ve got information about how you can get your hands on copies of the prints at the bottom of the story.

Up first for November is “A Private Little War.” Take us through the genesis of this print…

ORTIZ: The Enterprise and crewman are derived from the scene where Kirk and McCoy are attacked by the Mugato. This was one of the first three prints that I made and it inspired me to create the next 77.

What I like about this one is how the white of the Mugato and the white negative space creates a shape across the center of the page and how the Mugato appears to fade into the background. The Enterprise crewman forms within a beam that mimics the Mugato’s horns. “I, Mudd” is next and it’s very witty and playful, right down to literally twisting a mustache. What inspired this one? And would you say it’s connected in any way thematically to your art for “Mudd’s Women?”

Oddly enough, they were both inspired by the romantic comedies of the ‘50s and ‘60s. It wasn’t until I added the hand that I felt I was able to convey that sense of lightheartedness.

You also have a bit of commentary at the top. What led you to add that and how surprised were you that the powers that be signed off on it?

I felt the design needed something along the top for some balance. In keeping with the episode, I went with a humorous tone. I think maybe that’s why it was signed off on. It just fit the image well. “The Conscience of the King” is bold and stark, and it’s also one of, if not the most photo-realistic prints you’ve done. First, why did you go that route?

I started with the mask. Since it’s gray, I thought the whole piece should be in black and white. I think that’s why it has a photo look to it. The mask is such a strong image that I didn’t think it needed too much more.

Second, how did you create this one?

The mask and shadows were created in illustrator. The background is a photo that I put through high contrast in photoshop and then converted to live paint in illustrator. “By Any Other Name” is another one that’s off the beaten path. It’s busy and playful — evoking a toy package, right down to the hole punched at the top — and it contains a lot more copy than most of your Trek prints. Take us through the evolution of it.

At first, I wasn’t sure that I could get away with this one. But since it was my first idea, it was hard to let it go without trying it. I was inspired by the old action figures from the ‘60s and ‘70s, like Mego and G.I. Joe. I knew that it had to look authentic, so my experience in consumer products and retail came in handy with the copy and legal verbiage. I would love to own one of these non-action figures, but based on the recommended age, I’m not old enough.

Last question. Which one would you most want on your wall… and why?

I would pick ‘A Private Little War.’ Because a Mugato is tough to beat. 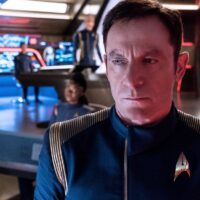