Let’s face facts: Most women just aren’t as in to Star Trek as men are. So maybe the generally awesome ones that are sometimes feel like they have to make up for the general disinterest of their sisters by going just a little too far? At least that’s the only explanation I can come up with, to explain one Star Trek fangirl’s decision to ruin an otherwise lovely pair of breasts by covering them with Spock heads. 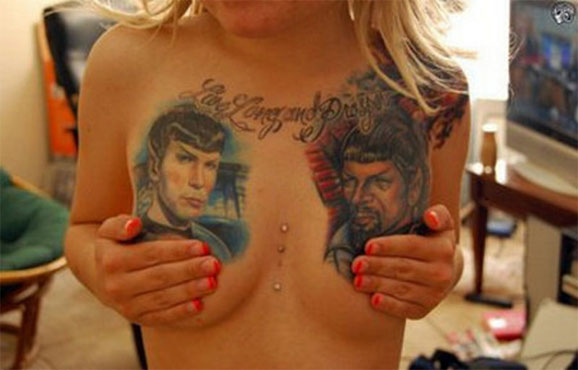 That image comes from JNolan.net, where they have a high-res version should you desire a closer look at Spock’s beard.

The tattoos are of course a reference to the original series episode “Mirror Mirror” in which Kirk and company are accidentally sent to a mirror universe where Spock is evil and wears a goatee. Perhaps the worst thing about this tattoo, aside from the fact that it ruins something beautiful, is that the evil Spock tat isn’t even really all that good. The tattoo artist seems to have turned him into a sort of gargoyle. Spock is evil, but he isn’t Smeagol.

What do you think? Is this just good, clean fandom or has this Trekkie gone too far?