Now that they have a director in place, I guess Paramount feels confident enough to pin down a solid release date for Star Trek 3, which is exactly what they just did. We’ve heard rumors that the studio was aiming to get the next film in the rebooted franchise into theaters for summer 2016, which just so happens to coincide with the 50th anniversary, and by gum, they did it. Or at least they scheduled it for July 8, 2016, they still have to actually make the movie. Baby steps.

The fate of Star Trek 3 (not to be confused with 1984’s Star Trek III: The Search for Spock mind you, though Into Darkness was a kind of Wrath of Khan-inspired, so maybe…) now lies in the hands of Justin Lin. Most known for directing the last three Fast & Furious movies, we heard yesterday that he got the job after Roberto Orci and Paramount parted ways. There have since been a lot of jokes about the Enterprise peeling out in space, or images of hot rod cars with Federation logos Photoshopped on them.

July 8 is a prime release date for a big, potential blockbuster like this, and so far, Star Trek 3 is the first to plant its flag in this spot. There will, however, be a couple of significant pictures premiering the week before, on the other side of the Independence Day holiday. Both Steven Spielberg’s adaptation of Roald Dahl’s beloved The BFG, and David Yates’ new version of Edgar Rice Burroughs’ Tarzan hit on July 1, 2016. At one point a while back, Marvel announced an unnamed movie for July 8, 2016, but there was no mention of it in the recent Phase 3 announcement. With the hot streak that the comic book studio is on right now, you have to assume that Paramount would have picked another day if this were the case.

The big reason for the split between Orci and the studio is rumored to be partially because of Marvel. Some sources have said that, in the wake of the success of Guardians of the Galaxy, execs reportedly wanted to move Star Trek in a similar direction. What exactly that means is unclear, but some mentioned that there was talk of trying to make their own weird alien creatures a bigger part of the action. Apparently Orci wasn’t down with that strategy.

We’ll have to wait and see if that really is the direction they go, but I hope not. Guardians of the Galaxy is great, and I really like Lin’s Fast & Furious movies, but I’m curious to see how his high-octane action aesthetic meshes with Star Trek. But a more action-centric franchise is definitely where they’ve been going with the new timeline, and that looks like it’s going to continue to be the case.

All of that said, we have heard that Star Trek 3 picks up with the Enterprise and her crew in deep space, in the middle of their five-year mission. Hopefully that’s the case, as we’ve already had two Earth heavy films and we’re ready to do some serious interstellar exploration. 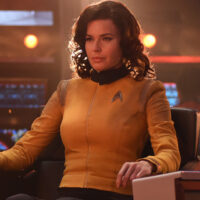