Stephen King’s The Stand is a massive brick of a book. Seriously, if someone were to break into you home, you could realistically club them unconscious with the hardcover version without much trouble. That expansive scope and scale has been one of the major problems bringing it to the silver screen (that and they can’t find anyone to direct the sucker). However, after a start and stop production process over the last few years, an adaptation does appear to be on the way, though the film may not end the way fans of the novel expect, or like.

And a warning, this article could SPOIL the end of the The Stand, so if you want avoid that occurrence, you might want to consider sitting this one out.

The post-apocalyptic novel, originally published in 1978 with an expanded edition dropping later in 1990, is a sprawling story set in the wake of a vicious plague called Captain Trips that sweeps across the globe, decimating the human race. A ton of survivors inhabit the remains of the world, including the 108-year-old Mother Abigail and the sinister Randall Flagg, who has supernatural powers and may be the personification of all evil incarnate. He’s a real charmer, and the production has Matthew McConaughey at the top of their wish list to play the part. There are so many people that, if the studio really does intend to deliver a single three-hour movie, a lot is going to have to be cut and condensed.

In the book, the story ends with a baby fighting off the superflu and two characters, Fran and Stu, wondering if maybe, just maybe the human race has what it takes to survive and not completely lose its humanity. It’s an ambiguous, low-key conclusion, but one that is both fitting and more or less satisfying. It’s also not one that will fit all that well is a big Hollywood tentpole, so you can bet your ass that they plan to make some significant changes.

After going through a string of high-profile directors, including Ben Affleck and Scott Cooper, The Fault in our Stars director Josh Boone now has the job and is reworking the script. While we don’t know how he’ll end the story, Badass Digest has had a look at the earlier draft, written by David Kajganich, and it is definitely way more action-packed than the book.

Here’s what the BAD report says about the end:

In this version, from last year, the good guy survivors from Boulder get together in an army and march on Las Vegas to kill Randall Flagg. Flagg’s headquarters is, of course, the Luxor Pyramid. The Boulderites invade the city while, off to the east, a squad fights at the Boulder Dam – which Trashcan Man explodes, killing Larry Underwood and sending a deadly flood to Vegas. In the city Flagg squares off against hero Stu Redman… who now has the power of God, and they have an Akira-like battle on the Las Vegas Strip, with Flagg trying to take Stu’s magic. Cars are thrown, Excalbur’s turrets are tossed, the people of Vegas are used by Flagg as disposable cannon-fodder. Meanwhile Nick Andros sacrifices his life taking out a howitzer. The Boulder forces, while armed, try to only take prisoners and rescue people from being under Flagg’s evil spell. It all comes down to Flagg and Stu, and whether or not Stu will absorb Flagg’s evil magic.

That’s…different. And if you think it sounds like they’re setting things up for future films, you’re not wrong. According to this report, Kajganich’s scrips also contains a mid-credits scene intended to do exactly that, establish a premise for The Stand 2, because Hollywood is only interested in franchises.

This is definitely a more blockbuster friendly conclusion, and you can see why a studio would push for this. People love big battles, and it worked for The Lord of the Rings, so why not here, right? What do you think of this ending? Would you like to see something big like this on screen, or would you prefer something more in line with the book? Boone claims to be a big fan of King’s novel, so it’s entirely possible his version will stick closer to the source, but only time will tell. 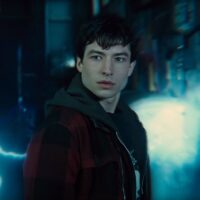 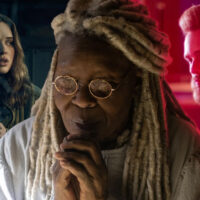