Simon Pegg On The End Of The World’s End 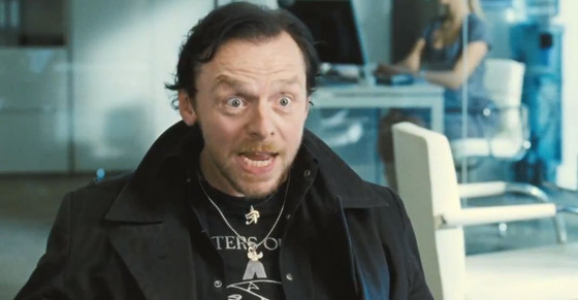 Over the weekend, audiences were treated to the final film in the Three Flavours Cornetto trilogy with The World’s End. While the film from director Edgar Wright and co-screenwriter Simon Pegg only grossed $8.7 million over the weekend, The World’s End‘s worldwide box office takes the total to $24.7 million. The science fiction comedy is pretty pleasing and exciting, but the film’s ending leaves a few things open to interpretation. While Shaun of the Dead and Hot Fuzz have happy endings, The World’s End (as the title would suggest) has a very, very bleak outlook. Now Pegg has chimed in with his thoughts about the end of The World’s End.

MAJOR SPOILERS FOR THE WORLD’S END BELOW!

In an interview with io9, Pegg talks about the decisions his character of Gary King makes at the end of the film, and his thoughts about The World’s End’s meaning.

We don’t like to prescribe meaning in our films. We always like people to come away and have to think about what we might be offering. You know, the whole idea about what was being offered to the planet Earth… it might have actually been a good thing. And it might have been better to go along with it. Maybe we should be told what to do. Maybe it’s better if we are controlled, because we are erratic and irrational creatures, that don’t always make the right decisions.

At the end of the film, Gary King, Steven Prince (Paddy Considine), and Andie Knightley (Nick Frost) refuse to be assimilated by the alien Network who have infiltrated our world and are replacing less cooperative members of our species with robot duplicates. Although the aliens claim they’re doing it for our own good, so we can be welcomed into the larger galactic community, King make the whole “life free or die” pitch, and the frustrated aliens give up and leave. Unfortunately, their departure kicks off a chain reaction that destroys all of the planet’s technology, and the survivors are left to rebuild civilization and deal with the now directionless left-behind robot population. Pegg continues:

You know, for Gary, it’s all about control. He doesn’t want to be controlled. And the choice he makes at the end of the film has huge ramifications. And it might not have been the right choice. But the irony is, in the final analysis, Gary does find happiness. And it’s not through alcohol, it’s through being on an adventure with his young friends. You know what I mean? Essentially, also, living, literally in, or rather in an approximation of, the past, because they’re in a world which is bereft of what they know. Like the toilet.

In the film’S epilogue, we see society starting back at zero trying to rebuild. Gary is now going from bar to bar with his new band made up of the young robot versions of his friends. In the new world, robots are unwelcome virtually everywhere, so when King enters a new pub with his new friends, it appears that he’s starting new adventures…or does it?

One reading of the epilogue would suggest that Gary has reverted back to his adolescent behavior, while another is that he’s moved on and he’s trying to make the best of life in post-apocalyptic England. If you notice, he doesn’t order a beer at the end, but rather a tap water. This would suggest that he has stopped drinking and now he’s clearheaded. On the other hand, he’s still causing trouble, while his real friends are trying to build better lives for themselves.

The ending of The World’s End isn’t so cut and dry, but still it’s a very satisfying ending to the Three Flavours Cornetto trilogy.