Oh those wacky celebrities, they get up to such mischief.

By all appearances, J.J. Abrams‘ Star Trek Into Darkness is going to be a pretty serious affair. The crew of the U.S.S. Enterprise is going to go through all manner of hardships, troubles, and general bad times. Despite the somber tone of their work, that didn’t stop the cast and crew from engaging in on-set shenanigans during production. Simon Pegg, who reprises his role as chief engineer Scotty, recently stopped by Jimmy Kimmel Live and spilled the beans about one particularly in-depth, far-reaching gag.

Apparently, he took to telling fellow actors that, while on set, they needed to wear “neutron cream” in order to protect themselves from ambient radiation. Pegg’s first victim was Chris Pine, who plays Captain Kirk, who he then recruited him to help target Anton Yelchin, who plays Chekov. The actor who fell most deeply into their trap, however, was Benedict Cumberbatch, who plays the villainous John Harrison. By the time he arrived on set, the entire cast and crew was seemingly in on the joke. Poor guy never had a chance.

According to Pegg, Cumberbatch was so on the hook that he was blaming ions in the air for giving him headaches and impacting his performance. My favorite bit in this video is when Pegg says that it’s “tough doing two things at once for an actor.” This is also an illustration that you should carefully read anything people ask you to sign, because he put is John Hancock on a release that publicly declared foolishness.

Star Trek Into Darkenss, the sequel to Abrams’ 2009 franchise reboot opens in IMAX and 3D this week, on May 16th. 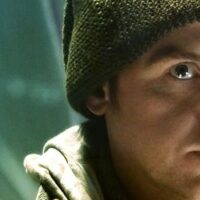 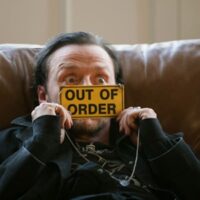 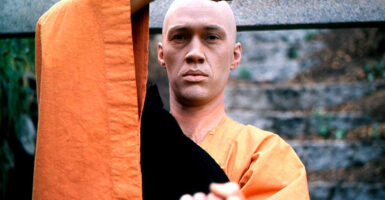