Sigourney Weaver On The History — And The Future — Of Aliens Three and a half decades after she first played the role, Sigourney Weaver is still inseparably bound to the role of Ellen Ripley from the Alien films. It’s not a bad legacy to have — she hasn’t been so typecast that it’s hampered her career, and Ripley herself is one of the strongest, most iconic female characters in science fiction film history. Hell, forget gender; she commands a place in the top 10 of any list honoring the best of the best in big-screen sci-fi, no qualifiers needed. Earlier this week the The Hero Complex Film Festival held an event honoring Weaver, and she shared her memories about the past and future of the franchise that has helped define her career.

It’s easy to forget the fact that, before Alien opened, it was just another little science fiction movie — nobody could have predicted how influential it would become within its genre and across aspects of filmmaking as a whole. In fact, Weaver said that she was initially quite skeptical about signing onto the project. After all, one of the things that helped make Alien a classic was H.R. Giger’s terrifying designs for the creature, and Weaver hadn’t seen those up front. She recalled:

I [had trepidations] because I hadn’t seen the designs. If you just read the script. It’s basically just Ten Little Indians and the monster is just — some monster. I pictured this big blob of yellow gel rumbling around. At the first meeting with Ridley, he pulled out all these beautiful big drawings H.R. Giger had done. He’s one of the main reasons we’re still here talking about this film. Giger’s designs are so uniquely disturbing and Carlo Rambaldi’s vision of the Alien — I wanted to be part of whatever that was because I had never seen anything like that on the screen before. It took me awhile to warm up to the rest of it — the character and everything. I just had to get to know [Ripley] better.

It’s an intriguing thought exercise to imagine how Alien might have fared without that brilliant creature design at its core. Would it have resonated so well with audiences as it did? The look of the alien certainly isn’t the only thing at play that makes Ridley Scott’s film a classic, but the xenomorph is so distinctive, so viscerally rooted in nightmarish psychosexual imagery, it’s like a syringe of disgust and unease right to the brain. Even with a solid script, a top-notch cast, and a visionary director, it could have been severely undercut if the creature at its core had been less terrifying.

Thankfully, the creature worked like gangbusters, and that combined with all the other elements to give us a new, compelling hero in the form of Ellen Ripley, the rare female Hollywood action hero who isn’t easily reducible to a “hot girl who can kick ass.” She doesn’t leap into action with perfect hair in an impractical leather catsuit; a power loader and a pulse rifle will do just fine, thanks. Time and again, she is shown to be intelligent, brave, determined, compassionate, and far more capable at handling a pack of xenomorphs than an entire squad of Colonial Marines. But Ripley’s legacy as a feminist icon arose from a very pragmatic purpose in the script. “They didn’t decide though to make a young woman the survivor because of any feminist philosophy,” said Weaver. “They thought nobody would ever think that this girl would end up as the survivor. So they basically did it as a plot twist.”

It’s the same sort of thinking that, a decade or so later, led Joss Whedon to create Buffy the Vampire Slayer. She was the last character you expected to survive, the clichéd blonde cheerleader who wanders down a dark alley and into the path of something monstrous. But, just like Ellen Ripley before her, Buffy had teeth of her own.

And while the first Alien movie gave us an unforgettable character in the form of Ripley, it was James Cameron’s sequel that truly cemented her as an icon, and which allowed the character to grow and become even more complex. With the loss of her daughter and her “adoption” of Newt, it put powerful maternal instincts into play that made her the perfect foil for Aliens‘ next evolution of the xenomorph mythology: the Queen. But Weaver points out that Alien was long before the franchise-obsessed Hollywood system we have now, and a second film was hardly a sure thing.

I don’t think anyone ever planned on making another [Alien]. I’ve never actually talked to Jim Cameron about this but I know that the producers David Giler and Walter Hill and Gordon Carroll said that they were actually interviewing Jim for something else and Jim [told them] I’ve written a script for [another] Alien. So they read it and flipped. I was in France making a movie with Gerard Depardieu and I received this incredible script with my character on every single page.

[Aliens] is an amazing piece of work. Whatever was nurtured in Alien becomes this huge canvas [for] these primal emotions and huge action sequences. The character of Ripley went from a girl who keeps her wits about her and survives to this very complex character — sort of an ‘everyman’. You know as soon as the door opens in the beginning and you see [Ripley] lying there and and then these guys come in and they take one look at her and say ‘She’s alive. There goes our salvage.’ You kind of go ‘Oh shit. What kind of world is she going to be in now.’ It’s sets her up as an existential hero who has lived beyond her time, who’s an outcast. I found it remarkable that Jim was so inspired by the first one that he would write this very complex and rich character.

One huge question now is what the future might hold for the Alien franchise. Ridley Scott returned to the universe in Prometheus, but the results were divisive at best, and none of its characters were even a pale shadow of Ripley. It seems a shame to leave Ripley’s last word as the disappointing Alien: Resurrection, but would Weaver even be interested in returning if somebody managed to put a fifth Alien film together. Here’s what she said on the subject:

I feel after going to a couple of these Comic Cons and meeting so many fans who are so passionate about the series, passionate about Ripley — that there’s more story to tell; but I don’t know how to do that. I don’t think Alien belongs on Earth popping out of a haystack, which is where I was afraid it was going to go. I feel it should take place in the far reaches of the universe where no one in their right mind would go. There are very few filmmakers that I can think of that I would want to entrust this to. But I can think of a couple… I feel there’s a longing in certain groups of fans when I meet them for the story to be finished because we really left it up in the air and I feel a bit badly about that because I was part of that decision making process. I didn’t want to make four and five in a bundle. I think it’s hard to make these films all in a big lump. You need time to sort of let things resonate so I can imagine a situation where we could at least finish telling her story. I think that would be very satisfying at least to me — although I haven’t done anything about it; but I can understand why that could happen and I certainly know young filmmakers who are interested in doing that. So we’ll just have to see what happens.

It would be nice to see Ripley get a proper send-off, assuming the right script and the right director were involved. Otherwise you know it’s just a matter of time before they reboot the franchise, and when that day comes, I don’t envy whoever is tasked with following the class act that is Sigourney Weaver.

You can read more of Weaver’s thoughts on Alien over at Collider. 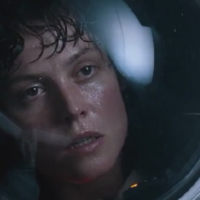