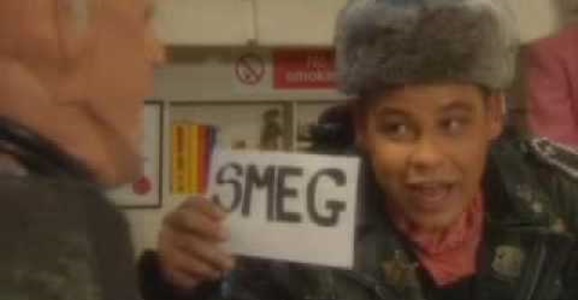 Red Dwarf
Set three-million years in the future, at the furthest reaches of deep space, BBC’s long running sci-fi sitcom Red Dwarf is equal parts ridiculous and inventive, and this is reflected in the swear words and insults they use to work around the censors. The show follows the adventures of a wayward mining ship crewed by Dave Lister (Craig Charles), the last living human; Arnold Rimmer (Chris Barrie), the holographic representation of Lister’s dead, uptight bunkmate; Cat (Danny John-Jules), a humanoid creature that evolved from a domestic house cat; and Kryten (Robert Llewllyn), a fussy maintenance droid.

Profanity Effectiveness Rating: As with shit, smeg and smeg head have a wide range of potential uses, making them a nice addition to any bank of curse words, if for nothing else than for some much-needed variety. After all, it’s nice to mix things up. The standards, while classics, can get stale of that’s all you use. Red Dwarf‘s swears have a unique edge to them, and though you might not know precisely what they mean the first time you hear them, there’s something intrinsically derogatory about them. (And I’ve actually used smog head in certain situations with great effect). 8 out of 10.