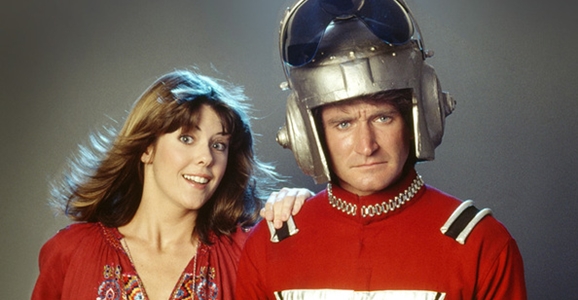 Mork & Mindy
With the recent death of Robin Williams, we lost the originator of one of science fiction’s great pseudo swears. Williams was renowned for his wild, improvisational, off-the-cuff style, and there’s something so very 1980s about watching a grown man wearing rainbow suspenders and pretending to be a space alien and shouting the word “shazbot.” Williams, of course, played an alien named Mork, from the planet Ork, a character who actually originated on an episode of Happy Days where Richie Cunningham (Ron Howard) claims to see a flying saucer. Spanning four seasons from 1978 to 1982, Mork & Mindy followed the adventures of an alien who came to Earth in an egg-shaped spaceship and aged in reverse. Pam Dawber had the unenviable task of playing Williams’ foil, and you have to imagine there was a lot of standing back and just letting the whirling dervish of comedy do his thing.

Profanity Effectiveness Rating: As with shit, shazbot has a wide range of applications. You stub your toe, “Oh shazbot, that hurt.” Your friend gets her car stolen, “Oh shazbot, that sucks.” But it also has uses as an exclamation, as a point of emphasis. It can be used as an expression of disappointment, but also in a more positive way. Like many more traditional swears, its meaning relies heavily on the intent of the user, and as such its usage is flexible. Also, it’s fun to say and makes us remember Robin Williams. 8 out of 10.