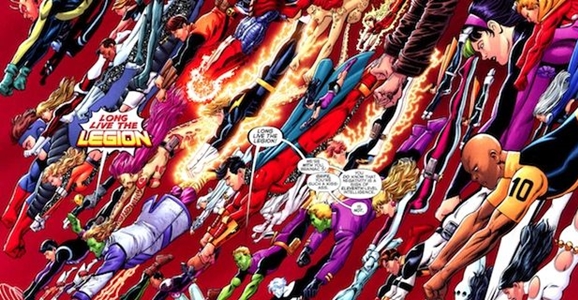 Legion of Super-Heroes
The Legion of Super-Heroes have been protecting the future of the DC universe since their introduction in Adventure Comics #247, way back in April 1958. They’ve been through many different iterations over the years, but the team is comprised of young heroes from dozens of different worlds, gifted with just about every superpower you could think of, all assembled to defend the United Planets. This is a team traditionally made up of teenagers, and anybody who remembers high school knows there’s going to be quite a few potty mouths. Thankfully, the LSH writers have come up with several go-to futuristic profanities over the decades.

Profanity Effectiveness Rating: “Grife” works well because it is phonetically close to “Christ,” thus allowing the LSH writers to take the future-lord’s name in vain without taking the future-lord’s name in vain. “Sprock” has both the single-syllable guttural impact and the hard consonant ending of of “fuck,” but I think the “fu” rolls off the tongue better. “Squaj” is just plain fun to say. However, you’re not likely to hear any of these being used in the real world, except maybe at a comics convention. 6 out of 10.