Sci-Fi Movie Timeline: Getting The Future Wrong Since 1995 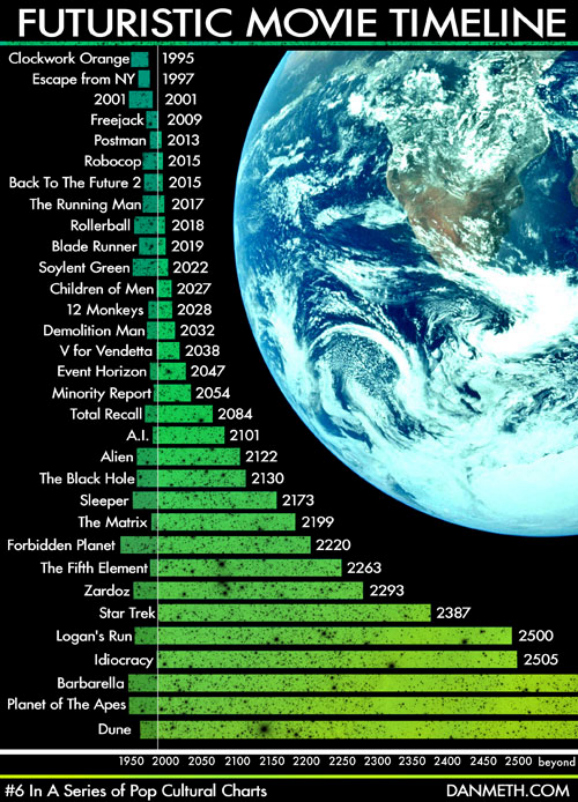 We’ve all been there. You’re watching Back to the Future Part II and you’re getting sucked up in the quick-paced story, but then all of a sudden you think to yourself, “There’s no way we’re going to have hover boards by the year 2015.” With only a year and a half before we hit 2015, we’re still waiting for power-laced sneakers, self-drying jackets, and hover-converted cars. Sadly, I think we’re going to be disappointed.

But do many science fiction movies ever come true? The key word there is “fiction.” Thanks to a new timeline compiled by a fellow named Dan Meth, we can look back on memorable science fiction movies that didn’t pan out, and the ones yet to come. As great as Stanley Kubrick was, the world of 1995 didn’t look much like the ultra-violent A Clockwork Orange. Thankfully, the retroactive accuracy of a science fiction movie doesn’t (or at least shouldn’t) take away from your overall enjoyment of the film.

There’s no way to predict the future, but it’s awfully funny to watch the future in movies. The future dystopia depicted in Kevin Costner’s The Postman is supposed to be unfolding right now in 2013, but so far nuclear war hasn’t crippled civilization on our planet. The movie was released in 1997 and the book it was based on was released in 1985. Was it reasonable to think that society would be in ruins in 2013?

As for Back To The Future Part II, there is still some time for Mattel to make hover boards, Pizza Hut to develop the re-hydrated pizza, and Pepsi to release the Pepsi Perfect.