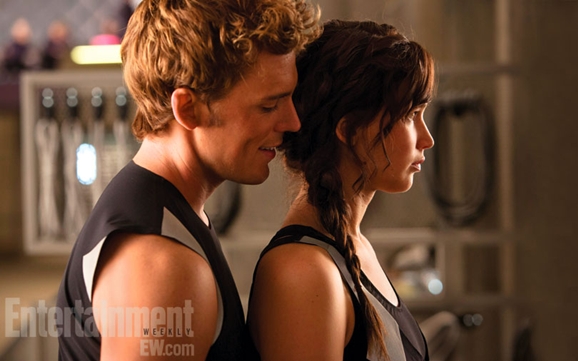 The Hunger Games: Catching Fire looks to be an even bigger hit than the original film. There will be more action and drama in Panem between Katniss Everdeen (Jennifer Lawrence) and the other tributes. Casting fan favorite Finnick Odair (Sam Claflin) wasn’t an easy task. The actor had to be just right or fans of the young adult series might bring out the tar and feathers.

In an interview with EW, actor Sam Claflin talked about his nervousness in getting the role of the dashing Tribute from District 4. The character is seen as the most attractive and desirable person in The Hunger Games series. Claflin admits:

‘Finnick is this tanned, green-eyed, sex god,’ laughs the 26-year-old Brit over sodas at his Waikiki hotel on a day off from shooting. ‘I’m thinking I’m brunette, I have loads of stubble, at the time I was by no means in shape. This guy walked in just after my audition who looked like Brad Pitt in Thelma and Louise. Yeah, I’m not going to get this.’

When he got the job, Claflin was worried about how fans would react to the infamous Quarter Quell parade scene in the book. After winning in the arena, Finnick Odair exchanges casual sex with Capital residents for secrets. During the parade, Finnick Odair is dressed in nothing but a fishing net to cover him up. He attempts to flirt with Katniss but his charms fall flat. Claflin says:

“They did have to tone it down from what it is in the book because they can’t make it too graphic if you know what I’m saying,” he pauses with a sheepish smile. “Because it was just a knot covering his, basically, you know what I’m saying! I was definitely prepared to do anything. But the costumer said ‘Well we can’t have you in nothing’ so I’m kind of covered up.” Still the scene left Claflin feeling rather exposed. “It was the scariest moment of my life,” he says with a laugh.

Earlier this week, EW fueled the fire for The Hunger Games: Catching Fire by printing the first look at the next installment of the popular young adult series. The entertainment outlet graced the cover of their 2013 movie preview issue with Katniss Everdeen and Finnick Odair, carrying his iconic trident. The fan reaction was mostly positive, but we will see how everything turns out when Lionsgate releases the film’s first teaser trailer.