I’m guessing that many folks here in the States who are familiar with Dmitry Glukhovsky’s post-apocalyptic SF novel, Metro 2033, first learned of it through the game series based on it and published by THQ and 4A Games. Now the property is set to try and conquer another medium, with a film adaptation in the works from MGM.

Metro 2033 is set in that most popular of possible futures, a barren wasteland in the aftermath of a nuclear holocaust. Moscow, now reduced to radioactive rubble, still has patches of survivors living underground in the subway tunnels. The story follows a young man who sets out on a journey that includes mutants and neo-Nazis attempting to launch a Fourth Reich. Which is weird, because you’d think Nazis wouldn’t want to go anywhere near Russia after that last time.

As reported by THR, MGM has picked up the movie rights to the book and assigned writer F. Scott Frazier to write the script. A quick search of IMDb Pro doesn’t turn up any produced credits for Frazier, but that doesn’t necessarily mean anything. Many writers work as professional screenwriters for years without getting anything actually made. Also, am I the only one who is now envisioning a post-apocalyptic sci-fi movie written by F. Scott Fitzgerald?

Glukhovsky’s novel was first published online in 2002, and later got a traditional publication in 2005. The series has obviously struck a nerve with Russian readers because there are now twenty books in the Metro series. THQ and 4A Games has published two games set in the book’s universe, Metro 2033 in 2010 and Metro: Last Light, which is expected to release in 2013. 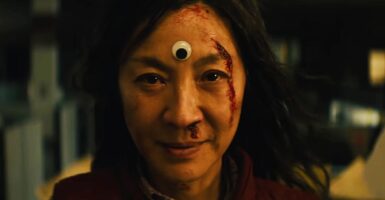