Science fiction visionary Ronald D. Moore has yet to find TV success after his seminal and iconic Battlestar Galactica reboot went off the air in 2009. The Emmy Award-winning TV producer has flirted with a TV remake of The Wild Wild West, A Knight’s Tale, and the failed 17th Precinct TV pilot for NBC. Although it started off with an interesting premise, the Battlestar Galactica prequel series Caprica lasted for only one season in 2011. Now that the premium cable network Starz picked up Ronald D. Moore’s new TV series Outlander, casting has begun as the TV adaptation of the best-selling novel series makes its way toward a 2014 series premiere.

As reported on The Wrap, Scottish actor Sam Heughan was recently cast in Outlander‘s lead role, the chivalrous Scottish warrior Jamie Fraser. Fraser is described as being “a natural leader of men, who has no political ambitions or desire for battlefield glories. Instead, he wishes to remove the price on his head and return to his family’s ancestral farm.”

Outlander will follow Jamie Fraser and his love affair with a married World War II-era combat nurse named Claire Randall, who was mysteriously sent back in time to the year 1743. Outlander is based on Diana Gabaldon’s book series, first released in 1991. So far there have been seven installments in the on-going Outlander book series, with the eighth expected for release in March 2014.

Outlander is a genre-bending hybrid of romance, time travel, and historical fiction about an 18th century Scottish clan. Think of it as a mixture of Game of Thrones, The Tudors, The Other Boleyn Girl, and The Highlander, but with time travel. Considering the popularity of those properties, and with Ron Moore’s name attached, Outlander has the makings of a sure-fire hit TV series.

Sam Heughan studied at the Royal Scottish Academy of Music and Drama in Glasgow, Scotland. He started his acting career in theater, but slowly made the transition to television in 2004 with the British TV series Island at War. Heughan landed a semi-regular role on the British soap opera Doctors on the BBC in 2009, and also played the young Alexander the Great in the Final Cut of Oliver Stone’s Alexander back in 2007.

Hopefully, Moore will find new success with Outlander. The last few years have been shaky for the 49-year-old TV producer. Battlestar Galactica is a hard act to follow, but if anyone could, it would be its creator and showrunner. Actually, it doesn’t seem like anyone from the cast of Battlestar Galactica has found much success after the series ended in 2009.

Moore is also working on a new TV series for Syfy called Helix, which is also expected to premiere in 2014. Helix has been compared to John Carpenter’s The Thing, as it centers on a group of scientists from the Center for Disease Control stationed in the middle of the Arctic. They are there to investigate a possible disease outbreak, only to find something more terrifying beneath the Arctic snow.

As for Outlander, Starz has ordered 16 episodes of the genre-bending historical TV series for a 2014 release. 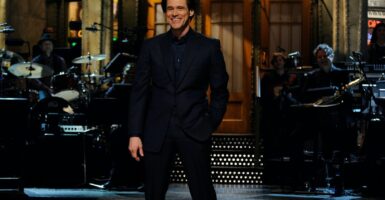