Believe it or not, the new RoboCop remake opens in theaters in about three weeks. We can finally see whether director José Padilha’s new take on the RoboCop story is worth watching, or if it will join a long list of mediocre remakes such as Straw Dogs and Total Recall. While it’s doubtful that the new version of RoboCop will be better than Paul Verhoeven’s 1987 original, we can only hope the film will give us a a fresh take on the source material. From everything we’ve seen, in terms of promotional material, it’s doubtful. Now Sony has released a new TV spot and international poster into the mix.

For the first time, I realized why Sony chose to remake the science fiction classic film. It wasn’t to find a new angle on the film’s story, but rather to sell a would-be new franchise for international markets — namely in China. Considering the staying power of the original film in the States, it’s doubtful that the remake will perform well domestically, but the Chinese movie-going market shouldn’t be taken for granted. The billions of people in mainland China could help RoboCop become a box office hit even if it doesn’t do well Stateside. The international poster above points to the spending power of the Chinese more than anything else.

Sony also released a very short TV spot that hints at the remake’s new action and characters. Samuel L. Jackson plays Pat Novak, the host of The Novak Element and a prominent supporter of mechanized crime control. He’s one of the new additions to the RoboCop mythology that weren’t part of the original movie. Novak’s role in the film is to sell the general population on OmniCorp’s drone technology and RoboCop as a viable option for law enforcement and protection.

Recently, Sony released a new viral marketing video that plays like a company’s keynote presentation at the Consumer Electronic Show (CES). The video features a speaker proselytizing the benefits of OmniCorp’s technology and how it can better human existence. The video actually plays more like indoctrination than a corporate video, but maybe that’s the point. Interestingly, the video takes place in the future at CES 2027, a full year before the RoboCop movie begins.

The remake takes place in the year 2028, when a multinational conglomerate called OmniCorp is at the center of robotic technology, with drones that are winning wars around the world. The corporation now wants to bring their technology to the homefront to protect cities across the country. Alex Murphy is a loving husband, father, and honest cop in Detroit who is critically injured after a car bomb attack. OmniCorp utilizes their robotics technology to save his life by turning him into RoboCop. 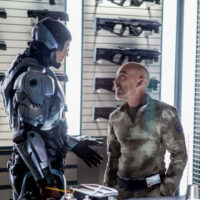 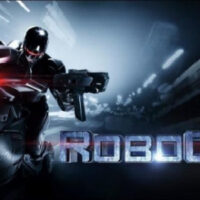