Since being ousted as director, many people have been wondering about Roberto Orci’s continued role in the upcoming Star Trek 3. We’ve heard that he will stay on, though in what capacity no one was quite sure, until now. Orci took to the internet to speak to the nature of his involvement, and it will be much more limited than before.

Once again, Orci visited the message boards over at Trek Movie, saying, “I’m producing, nothing more or less.” That’s about as straightforward and to the point as you can get. And while we’ve heard that Star Trek 3 is going to continue to work from a script by John D. Payne and Patrick McKay, it sounds like that is up in the air as well, as Orci replied to another comment, saying, “I won’t lie, I don’t know yet [who is writing], but the story we are talking about would be awesome, hang in there!”

The new Star Trek films have drawn criticism from many fans for rewriting the history of the beloved franchise, something Orci has been notoriously testy and confrontational about, which hasn’t changed. He went on to address this topic, as well as the infamous secrecy surrounding the films, saying, “Stop blaming BR [Bad Robot]. It was my idea so that you would not know what was gonna happen next. Nothing more or less. I stand behind it. And it, again, is the reason why I make movies and you don’t.”

That sounds like the Orci that makes Star Trek fans grind their teeth.

Now that Orci is no longer in the director’s chair, there have been tons of questions swirling about. Perhaps the biggest one, who will helm this picture, was answered the other day when Fast Five’s Justin Lin was given the gig. But that still leaves the story to contend with. Basically all we know at this point is that Orci won’t be writing it anymore. We’ve heard rumors that it involves various factions racing for a time travel device, which could lead to even more tinkering with the timeline.

Out of everything we’ve heard, however, the most promising bit is that the plot supposedly picks up a few years from Star Trek Into Darkness, and finds the crew of the Enterprise in the midst of their five-year mission. That’s refreshing to hear, because after two films that spend the majority of their time and focus on Earth, we really, really want to get out into deep space and find out what’s going on out there. Regardless of how you feel about the new movies, whatever happens, we’d way rather have it happen in space.

One report about why Orci lost the directing job, which would have been his first ever, is because Paramount Pictures wanted to steer the franchise more in the direction of Guardians of the Galaxy. What that means exactly is unclear—many speculate it means playing up the strange creature angle of the series—but apparently Orci wasn’t on board with that strategy, which led to the split.

As with most big tentpole movies like this, we probably won’t know a ton until we actually sit down in a movie theater, but at least we know when we’ll see Star Trek 3. Paramount recently announced the film will open July 8, 2016, which just so happens to coincide with Star Trek’s 50th anniversary.

Are you excited for Star Trek 3? Do you think Orci’s lessened role will help or hurt the picture? Sound off below if you’re so inclined. 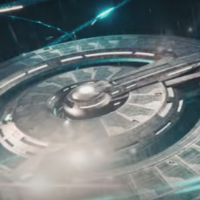