How Does Rian Johnson Use Time Travel In Looper? 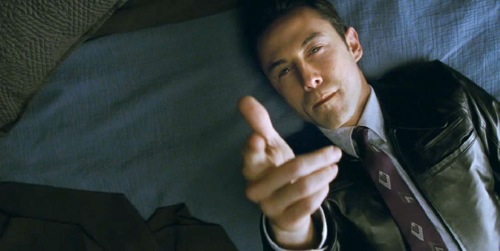 Time travel is a tricky thing. How do you effectively show time travel when the science isn’t quite there to make it tangible? But wile movies like Back To The Future, The Terminator, and Primer do the sci-fi concept justice; they are often riddled with “problems” by fans of the genre. In Rian Johnson’s new film, Looper, he tries to portray time travel as something organic and not merely plot points on a map, chart, or timeline.

In an interview with Mike Ryan from the Huffington Post, Johnson admits problems that come along with telling a story with heavy time travel elements. The high-concept director wanted to tell an engaging story without having the tropes of time travel to bog down or get in the way of the storytelling. Often times, fans of the genre would point out that some time travel movies don’t “make sense” when it comes to creating paradoxes and time loopholes.

The premise of Looper involves a hit man named Joe (Bruce Willis) who was sent back 30 years in the past to be killed by his younger self (Joseph Gordon-Levitt). The question arises, if the younger Joe is now aware that he will get sent back to the past to be executed, does he know to avoid whatever he did to get sent back? Johnson’s explanation for this paradox comes from the mindset that time travel is an organic occurrence and the memories of both versions of Joe are trying to work its way to become sharp, once they become concrete. Johnson explains:

Well, first and foremost, and this sounds like a cheat, but, in reality, this is the only thing that made sense to me: I feel like so often the paradox element of time travel is approached from a chart perspective, or from a timeline perspective — from a mathematical perspective where “A” happened so “B” happened so “C” happens. In my mind, it made much more sense to look at the universe and the way the universe deals with these paradoxes. To look at it as an organic body and to look at it … it’s almost like you push a foreign object into an organic body…” Johnson continued, “And in the present moment where they’re defined, they become sharp again. But the main thing is, the memories are just trying to adjust and trying to figure out how to deal with this paradox. Which, to me, is how the universe actually works. You know, it’s a big, organic mass.

We’ll see how Rian Johnson tackles time travel when Looper is released in theaters later this month. This interview serves as food for thought when it comes to looking at time travel as a natural occurrence rather than a mechanical one. It also sounds like time travel is a small piece in the bigger puzzle of Looper.