Related:
Cross The Streams: Catch Up On The Walking Dead Before Its Season 5 Premiere

Fans of NBC’s post-blackout drama, Revolution, have been waiting a seriously long time for the first-year show to return. We haven’t laid eyes on a new episode since November 26th, and we still have almost exactly a month until the show comes back on Monday, March 25th. The network has done its best to keep Revolution in the forefront of viewer’s minds, with those Wheatley’s Letters animated shorts. While a nice touch, these are a bit of a tease, just enough to make you remember the show.

As reported by EW, NBC is unveiling the first episode of a five-part, live-action webseries yesterday. While the main action of Revolution takes place 15 years after a worldwide blackout, this run flashes back four years, to 11 years after the global catastrophe.

The main story follows Captain Tom Neville (Giancarlo Esposito), of the Monroe Militia. We pick up the activity on that fateful night where Miles Matheson (Billy Burke) first tried to kill General Sebastian Monroe (David Lyons). That’s the incident that kicked off Miles’ life as a grizzled, secretive bartender prone to keeping a low profile.

Neville will be charged with the task of tracking and hunting Miles, which, given what we know about the former leader of the Militia’s background, sounds like a pretty daunting job. Along his way, he will also stumble “upon an even greater conspiracy that could change the course of the Republic forever.” What that is remains to be seen, but it sounds like it could be fun. Neville may be the most interesting character in the entire series, and it will be nice to get to know him a little better.

I like what NBC is trying to do with these little side projects. Revolution presents a rather limited view of the post-blackout world — the view of the rebels — but these spin-offs offer differing perspectives. There’s an entire world out there, and we’re starting to get a clearer overall picture.

The first episode dropped today, February 25th at NBC.com. As of this posting, it isn’t up yet, but we’ll update once it does.

In the meantime, check out the first page of the script below and see what you think. 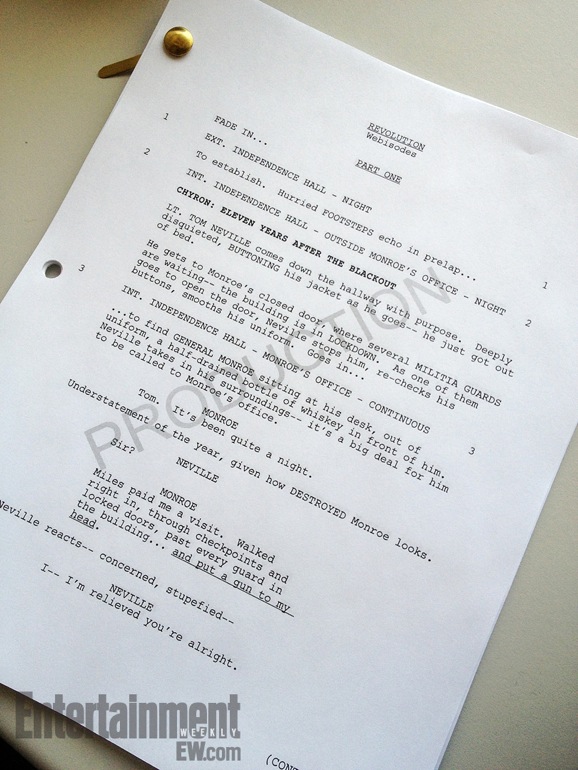