ABC is resurrecting V and, on the surface, it doesn’t seem like a good decision. Sure V was a blockbuster miniseries back in the 80s but the subsequent spin-off television series never really went anywhere. Now ABC is skipping right over the miniseries, the component which worked best last time around, and going straight to the previously failed weekly one hour drama format. Not that they have any choice. The glory days of the made for television event is long over, with the miniseries’ relegated to barely watched deep cable.

So on the surface this may seem like an idea destined for failure but the truth is, having just watched the series premiere, I think they may be on to something.

The show’s one-hour format debut isn’t exactly inspired, but it’s economical and it gets right to the point. Within minutes the aliens have landed and from there it skips forward at a rapid pace which sets up the same intrigue fans of the first series are familiar with. The aliens, who call themselves Visitors and “Vs” for short, present themselves as human in appearance. Actually you might say they appear hyper-human. Imagine an entire ship full of mid-level runway models and you’ll have some idea of the hotness level they’ve brought into our atmosphere. The V’s loudly proclaim that they’ve come in peace and immediately set about curing all of mankind’s ills. This of course means they’re up to no good and if you’ve seen the original you already know what that no-good is.

And really that’s the biggest problem with the premiere of V. It doesn’t really bring anything new to the table. It’s exactly what you’d expect, except more compressed. The first episode feels like it’s rushing, rushing, rushing and there are moments when because of that, it doesn’t always fit together.

But those are problems which may well be rectified in subsequent episodes. What they’re trying to do here is build a solid foundation for a decent series and, against all odds, I’d say they’ve done that. Part of the reason it works as well as it does is the cast which is, without a doubt, first rate. Lost fans and people who enjoy seeing Angelina Jolie being kissed by a woman will recognize Elizabeth Mitchell, who capably steps in as the series lead. In the premiere she’s partnered with the incredibly talented and often underrated Alien Tudyk, and they play FBI investigators on the trail of something bigger than they realize. Morris Chestnut, best known for his work on film, plays a significant role as a mysterious figure. Scott Wolf is the V universe’s news anchor of record and the rest of the cast is equally capable, in particular the Vs themselves who manage to pull of both beautiful, ethereal, and creepy as hell all in one fell swoop.

V even has a sense of humor, it knows when to lighten the mood, something ABC’s other big sci-fi series FlashForward has never figured out. That’s a nice counterpoint to the show’s dramatic moments, some of which are, admittedly overdone. Conflict between Mitchell and her son for instance, rings hollow. Luckily the chemistry between she and Tudyk (who is unfortunately, only a guest star) plays much better.

It’s only one episode and it’s an admittedly imperfect episode, so it’s hard to guess where V will go from here. This isn’t the eye-popping instant hit that Lost was, but it’s also not the instant disaster that other 80s remake shows have been (I’m looking at you Knight Rider). Take heart V fans, ABC’s retread has brains, brawn and even a little bit of style. Should the show get a chance to settle in as a weekly staple we could be in for something special. 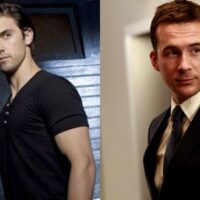 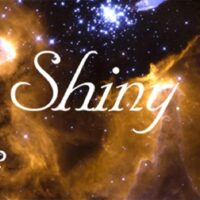 Alan Tudyk On The Prospects Of A Firefly Revival 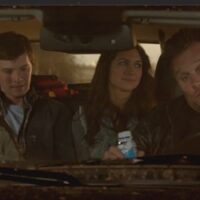 Review: Zombieland Pilot Could Be Worse, We Guess