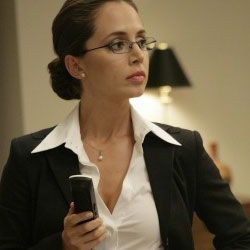 Dollhouse has one big, glaring problem right off the bat. Eliza Dushku can’t act. This issue is especially evident in the show’s debut episode which is, to say the least, less action-oriented than some later installments promise to be. Maybe we won’t notice that Eliza looks like a deer in headlights when she’s reciting drama-heavy lines, if she’s doing it while enaged in scantily-clad, lingerie karate. Tonight though, there were fewer physical punches thrown than emotional ones. Dollhouse isn’t playing to her strengths… whatever those are.

Heavy on emotional development, the debut episode of Joss Whedon’s new girls kick ass show asked Dushku to give a performance with real depth, depth Dushku doesn’t seem to have in her. But at least we’ve gotten the introductions out of the way and we know what’s going on. Eliza Dushku plays Echo, one of several exceedingly sexy people who live in a mysterious, lavish place called the “Dollhouse”. While inside she has no memories, no personality. She stays that way until she’s needed by the Dollhouse’s owners, who hire out the services of their dolls to wealthy millionaires. When one of the dolls gets a job, she’s imprinted with the perfect personality and knowledge to pull that job off. When she’s done, that personality is wiped leaving her a blank slate awaiting her next job.

In tonight’s mission, Echo is programmed to become a hostage negotiator. One problem: the personality she’s been programmed with is that of an abused woman and, as luck would have it, in the course of negotiations she encounters that abused woman’s molestor. Heavy stuff.

It’s hard not to respect Dollhouse for coming out guns blazing with heavy drama, taking on the dark topic of child molestation and the destructive effects it can have on someone’s adult personality, all wrapped in a science fiction package. Ballsy move. It’s just that their lead actress can’t pull it off. You’d better tone it down Joss, and stick with finding excuses to put Eliza in increasingly more see-through outfits.

Except even there I’m not sure Dushku is up to the challenge. She’s pretty, don’t get me wrong. But when she’s not playing the librarian-like hostage negotiator Dollhouse seems intent on portraying Echo as some sort of Angelina Jolie sexpot. This is also something that Dushku is not. She’s the girl next door, not the exotic and mysterious kung-fu supermodel.

Maybe it’ll get better, maybe Eliza will grow into the role and Joss will learn to tailor his writing to what she’s actually capable of. Maybe Dollhouse will find the right tone, should the series be lucky enough to continue on. I hope it does, because there’s potential in this premise and this world. A promise of smart science fiction used to tackle interesting and thought-provoking topics while at the same time delivering the cheap thrills of episodic television.

With its debut Dollhouse hasn’t exactly hit the ground running but it is moving towards something, something which may get better as time goes on. 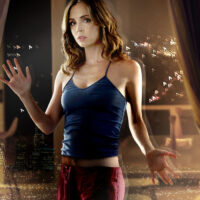 Eliza Dushku: How Sexual Harassment Allegations May Have Ended Her Career