As a whole, Red Dwarf isn’t particularly lauded for groundbreaking special effects. In fact, the science fiction sitcom is more widely known for the cheesiness of the visual side of the show. That said, two new behind-the-scenes photos of the model of the titular ship from the new series, Red Dwarf X, look damn good. 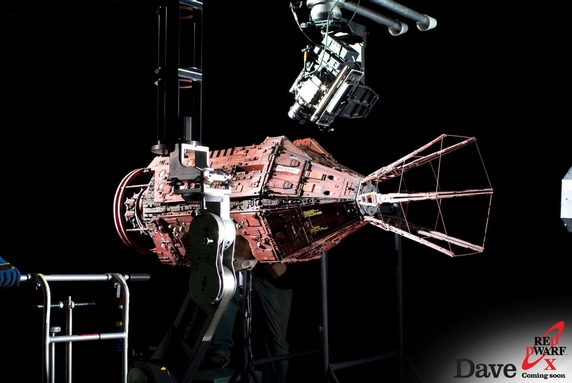 The first picture, posted by Dave TV, is a full shot of Red Dwarf. You get a good feel for the level of detail in the model work. What this image doesn’t give you is an idea of the relative scale. The craft, a deep-space mining vessel, is a massive, blocky behemoth. At one point in the series Arnold Rimmer (Chris Barrie) goes on an extended backpacking excursion through the lower decks. Also, the ship is large enough that, over the course of three million years, Dave Lister’s (Craig Charles) pregnant cat can give birth and spawn a civilization where domestic house cats evolve into humanoid creatures. 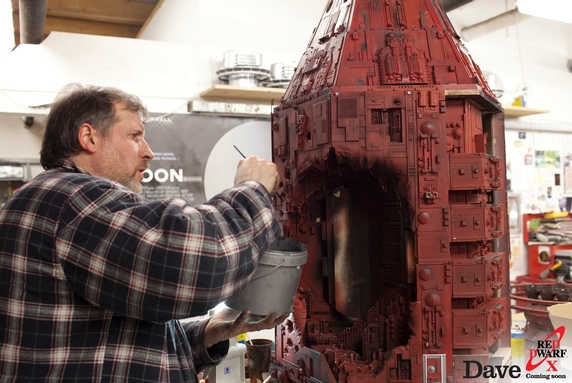 Picture number two shows a designer working on the model. Most interesting in this image is the gigantic gash torn in the hull of Red Dwarf. That’s not supposed to be there, and you can imagine that damage of this extent will play large role in at least an episode or two of Red Dwarf X.

Red Dwarf follows the adventures of the oddball crew of the titular ship. Lister is the last living human, and possibly the most slovenly one to ever exist; Rimmer is a hologramatic representation of his petulant bunkmate; Cat (Danny John-Jules) is the last remaining member of the aforementioned cat people; and Kryten (Robert Llewellyn) is a domestic service droid who has gone a bit daft. This collection of miscreants bumbles around the emptiest reaches of space, getting into sticky situations at every turn.

Red Dwarf X premieres in the UK on Dave, Thursday, October 4th, and writer/director Doug Naylor assures US fans that it will hit their shores soon after.