Great Scott! Raising Hope Getting A Back To The Future Episode

Given the rednecking white trash aesthetic that Raising Hope has been roasting and celebrating for the past few years, you’d think when going all out for a movie reference, they would source something like Joe Dirt or a medley of every role Taryn Manning has ever played. But instead, Greg Garcia and company are bringing a little bit of Hill Valley, CA to Natesville and the Chance clan. But I doubt they’ll be using roads to get there. Roads…?

When Raising Hope returns from its winter break on January 8th, it will air “Credit Where Credit Is Due,” and it looks like Back to the Future is stamped all over it. From smoke-filled DeLoreans to Christopher Lloyd nervously asking what year they’re in, the episode looks to be steeped in references to the classic films. Maybe if Lloyd can go find Griff now, BTTF Part II might not even need to happen. Not that that’s a good thing.

Fox released several promo photos from the episode, and it looks like the Chances are having car problems. And because “new car” plotlines in sitcoms have to be wild and crazy, the DeLorean looks to be a serviceable replacement. Admittedly, it looks like a hokey story shoehorned in just for a homage, but if there’s a TV character who looks as good driving a paradoxical time machine, it’s got to be Burt. To add some personal backstory here, I had an uncle whose driver’s side door to his pick-up truck got knocked off, but instead of buying a DeLorean, he used several dozen feet of rope to fix his problem, while then using the passenger door for an entrance and exit. I know a little bit about trashy people.

I hope that hearse door doesn’t spell doom for Doc Brown. Maybe it’s just what Burt buys before he gets to the good car. And really, when can I change the door to my linen closet into a DeLorean door? Probably when my hallways are wider than three feet. 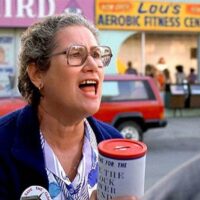 Back To The Future Actress Dead at 91