Are you ready for season three of AMC’s zombie-survival drama The Walking Dead yet? Are you sure? Like 100 percent, absolutely, blacked-out-that-date-on-your-calendar ready? Just in case you aren’t, just in case you’ve been living under a rock for the past few months, here’s another new TV spot for you to sink your teeth into.

Clocking it at a scant 30 seconds, this video doesn’t drop a whole lot of new knowledge. After an initial set up full of quiet tension, action quickly takes center stage. There’s lots of running, fighting, screaming, and a bunch of grim, grim looking survivors. This promise of more action is music to the ears of those fans (myself included) that have gotten down on the show for needlessly drawing things out over the past two seasons. If this brief clip is to be believed, that situation will be rectified in season three.

This spot also reconfirms that there will be some significant departures from Robert Kirkman’s comics. After the mayhem at Hershel’s (Scott Wilson) farm that ended season two, Andrea (Laurie Holden) got separated from the rag-tag band of survivors. Newcomer Michonne (Danai Gurira) saves her ass, and from the look of things, they’re the first two who encounter this season’s other big new addition to the cast, The Governor (David Morrissey). He runs a survivalist enclave called Woodbury, and rules with a cruel iron fist.

In The Walking Dead comics Michonne joins the group at the prison, and it is some time later that she, Rick (Andrew Lincoln), and Glenn (Stephen Yuen) first encounter the vicious despot. Let’s just say the meeting leaves some deep and lasting mental, emotional, and physical scars all around.

It doesn’t bother me all that much when an adaptation plays fast and loose with source material. That happens, and you can do things in one form that you can’t always do in another. My only hope is that The Walking Dead stays true to the spirit, tone, and subject matter of the comics. Things get brutal and nasty, and the narrative takes a dark turn at this point. Some of it is going to be difficult to get away with showing on TV, but lets all hope that AMC has the sack to go for it. 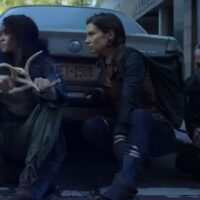