New Picture Shows The Doctor And His Latest Companion On Set

We still don’t know much about The Doctor’s new companion, to be played by British actress Jenna-Louise Coleman. We know she’s taking over a room in the TARDIS from the departing Rory and Amy Pond. We know she’s scheduled to first appear in the 2012 Christmas episode. Her character is reportedly named Clara. Also, she’d kind of adorable.

Now the BBC’s official Doctor Who blog has posted a new shot of Smith and Coleman on set, and this could very well hold some cleverly encoded clues about the next season! Okay, probably not, but it is nice to see a good, close-up shot of the two of them as opposed to telephoto paparazzi pics. 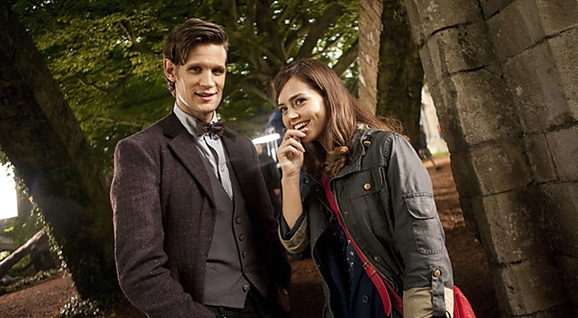 We’ve still got quite a wait to see what The Doctor and The Girl Who May Or May Not Be Named Clara are up to in season seven. The show isn’t expected to premiere until sometime in the fall, with the Christmas episode likely airing somewhere in the middle.