This Is The End Packs Deadly Hilarity Into Redband Trailer

I realize it would be stupid going into This Is the End with expectations that anything remotely centered within the realm of science fiction is going to happen, except a generic alien invasion. Though I would love to see Craig Robinson as a token lab geek.

The trailer sets up the simplistic premise of a James Franco house party that gives way to Los Angeles engulfed in flames, having been attacked (?) by a bunch of floating ships. The party dissipates — and by that I mean the body count rises — and the action centers on Rogen, Franco, McBride, Robinson, Jonah Hill, and Jay Baruchel, all struggling to cope with the apocalypse together. The supporting cast includes Paul Rudd, Jason Segel, Emma Watson, Martin Starr, Kevin Hart, Mindy Kaling, Aziz Ansari, David Krumholtz, Christopher Mintz-Plasse, and Rihanna.

You can see which one survives, and who gets the Milky Way, when the film releases on June 14, 2013. 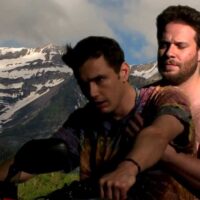 An Iconic Seth Rogen Movie Is About To Leave Netflix, Watch It While You Can