This Friday, audiences across the country will be dazzled and thrilled by the latest film from Mexican director Guillermo del Toro, Pacific Rim. Whether or not you believe the film’s current tracking with general audiences, the giant monster movie will either sink or swim in theaters this weekend. Hopefully, it will be the latter. To make sure Pacific Rim will perform at its best with general audiences, Warner Bros. has been making a final promotional push with the new film, so the public will be fully aware that this movie is just too big to ignore. Mirroring the film’s epic scale, Warner Bros. has released a super-sized, 14-minute featurette that examines almost every facet of Pacific Rim.

While the featurette highlights the epic Kaiju War that has been going on for almost 20 years, it also features what humanity has done to prevent these violent attacks. It’s at a point during the war when humanity seems to have given up on completely destroying the alien monsters, instead just trying to minimize the destruction the Kaiju can do to the world’s coastal cities.

Almost every major affected country has their own version of Jaeger — the giant, human-piloted mechs — each with their own distinct personality and traits. The centerpiece of Pacific Rim is the Jaeger Gipsy Danger, piloted by washed-up fighter pilot Raleigh Becket and his rookie co-pilot Mako Mori.

The extended featurette also showcases the impressively named Stacker Pentecost, Raleigh Becket’s commanding officer and the film’s moral centerpiece. Apparently, Idris Elba modeled the character after President Barack Obama and Russell Crowe in Gladiator. A good mix, if you ask me. You can see that type of presence and command of the screen in almost every trailer for Pacific Rim.

Warner Bros. has been pulling everything together so Pacific Rim will succeed at the box office this weekend. Along with promotional trailers and featurettes, they have recently partnered up with Canadian movie exhibitors Cineplex to offer Canadian movie-goers a Pacific Rim SuperTicket, which is an early digital copy of the film that you get with the purchase of a movie ticket. This new promotional model is in the same vein as Paramount’s World War Z Mega Tickets, a way to give fans something more than just a movie-going experience. Will this be enough to make a big difference in Pacific Rim’s worldwide box office?

When a dimensional rift opens up at the bottom of the Pacific Ocean, terrifying alien sea monsters invade the Earth and begin wreaking havoc on coastal cities. To fight this alien threat, military superpowers create the Pan Pacific Defense Corps, who defend the planet with the giant Jaegers. After 20 years of destruction, the obsolete Jaeger Gipsy Danger is humanity’s last chance for survival. 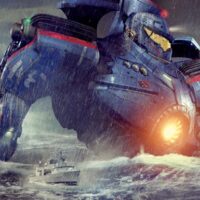 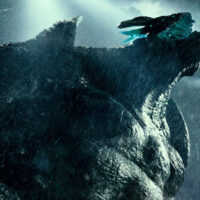