We’re still a few months out from the return of BBC America’s clone drama Orphan Black, but we’re ticking off the days on our calendar, and getting new information about what the upcoming season 3 will look like. There are some big changes in store, with the shadowy Project Castor and the newly added male clones, played by Ari Millen, much like Tatiana Maslany plays all the female members of the Clone Club. There’s also this creepy new still photo.

John Fawcett, co-creator of the series, showed up at the Television Critics Association winter press tour to share a bunch of new details, and the picture for the third season is starting to come into focus. According to Fawcett, the new clones, all militarily trained—which puts Sarah, Cosima, Allison, and the rest at a serious disadvantage—have been a part of the plan since day one. The show was always going to get there, but they just took their time.

In the process of season two, we cast Ari in the role of Mark, but that character was interesting, because originally we were going to kill him. But it was a little bit of an organic process: who was going to be the face of Project Castor? And partway throughout season two, we realized our answer, and that’s how that came to be.

Though they knew there were male clones coming in, it still came as something of a surprise to Millen. He plays both Mark and Rudy, who is pictured above—you know, the crazy guy those wicked scars across his eyes—and learned the true nature of his role(s) during production. Millen says:

When the Castor boys were introduced at the end of season two, I found out two weeks before [I was playing clones], and then two weeks later, I had a mohawk and a scar, but I didn’t have any other information, so we started with a visual first. And then over the summer, I asked [co-creator] Graeme [Manson] and John, what can you tell me? So by the time we got to the season, I had a bit more information. I had formulated in my head who he was, and obviously with a scar and mohawk, this guy is probably a little bit crazy. Especially the way he was introduced at the end of the season. So the first thing I read [for season three], is [Rudy facing off with Sarah]. And [the intensity for Rudy] continues. He will continue to get under people’s skin and just pick at you and pick at you until you blow up and he’s won. And then you get a smile. That’s Rudy.

The emergence of these new clones begs the question of whether or not these two groups will be the only identical faces we’ll see in the series. As you can imagine, Fawcett doesn’t reveal much, playing coy and saying:

Listen, I really think that the thing that I love about our show is we’re always trying to make choices that evolve the show in directions that people aren’t expecting. And as much as I think Graeme and I have the big master plan, there’s always room for deviations, and we always like to keep people on the edge of their seats. And what’s cool about the show is it’s kind of a mashup; it could go in any direction we want. It seems like we can go in a horror direction, a comedic direction, we could go in a dramatic, action-orientated direction. I think, so far, anyway, we’re managing to put all these genres together and make something that is really unique. And the more often we make decisions that people aren’t expecting, the better the show is.

Millen isn’t the only new addition, and season 3 will see even more fresh faces. Eternal villain James Frain (The Cape, Grimm, Agent Carter) shows up and “plays a really amazing, scary guy that’s come in from Topside and is a very dangerous threat to our girls.” Shameless’ Justin Chatwin also appears, playing a face from Allison’s past who arrives on the scene and causes some drama in her marriage, because there isn’t already enough of that. There’s also a scorpion. Yes, a scorpion. 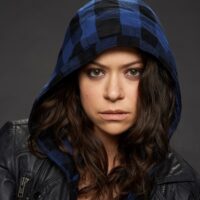 This Orphan Black Season 3 Trailer Prepares For The Clone War 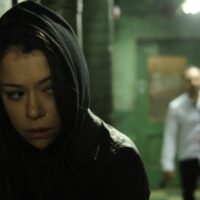 Learn How Orphan Black Pulled Off Those Clone Effects, Plus Details On Season 2

These Orphan Black Season 3 Teasers Are Not Your Property